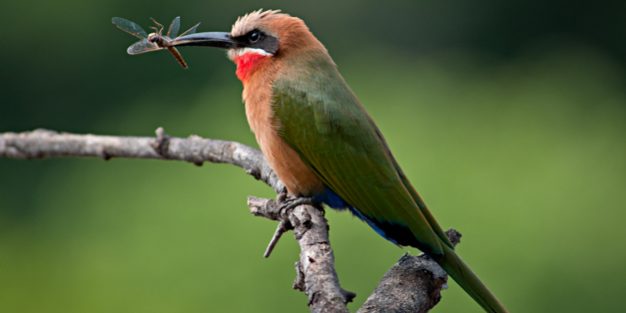 If you have been so lucky to have visited Mashatu Game Reserve, I’m certain the aesthetic beauty of one particular bird stood out whilst driving (walking, or cycling for that matter) through the wilderness. The White-fronted Bee-eater is one of Mashatu’s most striking birds; their plumage displays bold colours of green, white, red, blue,black and orange.

The striking colours of the White-fronted Bee-eater

The White-fronted Bee-eater is not only a feast for the eyes; the birds are skilled in flight and excellent hunters. They acquire a unique ability to hunt down insects – of which they favour bee’s, in flight and consume them without enduring its painful sting that most of us are familiar with. The Bee-eaters shape, size and form compliment its ability as a skilled hunter. An interesting characteristic of the White-fronted Bee-eaters in comparison to other Bee-eaters is the shape of their wings. White-fronted Bee-eaters, unlike most other Bee-eaters are sedentary birds making their wings far more board and squared off at the edges, where the migratory species have acquired more slender and pointed wings which assist them in long flights during migration.

Their needle sharp beak allows for exact accuracy when catching their prey, thus to avoid the sting of the insect. Once the pray has been snatched out of the air the bee eater finds its perch and begins the ‘destinging’ process by squeezing the insect to discard of its poison and then hitting it against the perch to remove the sting. It may seem like a lengthy process all for a small meal, but being one of the few birds who are capable of this feeding technique it opens up an array of insects to the menu – those usually avoided by other insect eating birds.

Squeezing the poison from a bee

The Bee-eater finding its perch before eating its prey

White-fronted Bee-eaters are gregarious birds living in colonies ranging from 40-80 birds. They nest in the sides of steep sandbanks, by digging horizontal holes using their beak and wings as a tripod freeing up their feet as a digging tool. For the more precise digging their beaks are used as little chisels.

Next time you drive through the wilderness and you hear a distinctive ‘Qerr’ from above; keep your eyes peeled for a swish of green across the sky. You may have spotted yourself a White-fronted Bee-eater, if so stop, observe and appreciate the beauty and individuality of this bird yet another one of Africa’s beauties.