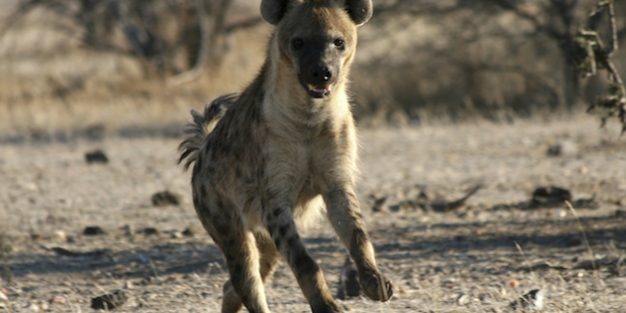 This clip was filmed along the Majale River where an old elephant died a while back. We saw the hyenas in the area everyday for weeks, as they made the most of the free meal. The carcass is pretty much done now, so they’re back to hunting for themselves. Most mornings we see them with impala skins, which is what the cubs are busy gnawing on. Our game vehicle underwent a close inspection when one of the adults decided to make sure that nothing untoward was going on. Satisfied with its findings, it then wandered off again. One of the cubs had sudden burst of energy, and raced up and down for the fun of it. I think it was trying to entice its mom into a game of tag, but given the heat, and the size of her post-pregnancy belly, she was having none of it.

This clip is of the cheetah mother and five cubs that we’ve recently started seeing in the area. The female is extremely relaxed around our vehicles, but the youngsters are still fairly skittish. With this in mind, we make sure never to approach too close. The last thing we’d want is for the cubs to catch fright and scatter, because they could run into trouble in the form of elephants, lions, hyenas, baboons etc. On this occasion they were more at ease than usual, although that was because they were hungry and mom had just brought them lunch. They were understandably reluctant to move away, and of course the fact that it was so hot added to them wanting to stay put in the shade.

The leopard family – mom and two cubs – had an impala kill up a huge Mashatu tree for a couple of days. These little guys, unlike the cheetah cubs, can easily climb way into the tree canopy if they’re not feeling relaxed or sociable. So it’s a lot easier to view them as a result. And of course, they’ve grown up with us around, whereas the cheetahs are new to the ‘hood.