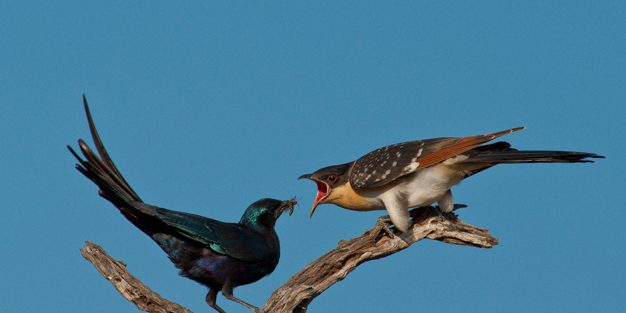 Brood parasitism is another one of nature’s cruel yet clever survival tactics, and the cuckoo is one of its biggest culprits. Out and about in the field one day we came across a very peculiar relationship – a Meves Starling feeding a juvenile Greater Spotted Cuckoo. The cuckoo twice the size of the exhausted starling was incessantly demanding food whilst it sat upon its perch basking. The cuckoo went so far as to peck the starling off the perch once it had kindly delivered food to it, as if to say “I’m not done yet, so go and get me some more”. This Poor starling had without a choice fallen prey to the con artistry of the cuckoo into becoming a foster parent.

The demanding juvenile waiting for its food delivery

Cuckoo’s along with other brood parasites such as honeyguides, honeybirds, whydahs and indigobirds locate a potential host and in perfect timing  swoop down into an unattended nest, quickly lay their egg and fly off, never to see their young again. As spiteful as it may seem one has to give some credit to the cuckoo for laying an egg at the speed of light and yet so stealthily. The starling cannot distinguish between its own eggs and the cuckoo egg and therefore treats it as its own until it grows up to be a very demanding foster fledgling. Until the day that the cuckoo reaches maturity and can fend for its self the starling will remain a slave to the fledglings needs.

After 3 days of viewing the needy, ungrateful cuckoo we gained a huge amount of respect for the often overlooked starlings. The commitment to their “offspring” is unwavering – at times we even viewed both of the foster parents feeding the cuckoo at once. However one really needs to acknowledge the resourceful tactics of the cuckoo. I’m sure we have all been told once before, “Don’t put all your eggs into one nest” – well I guess this approach is working out quite well for these parasites.