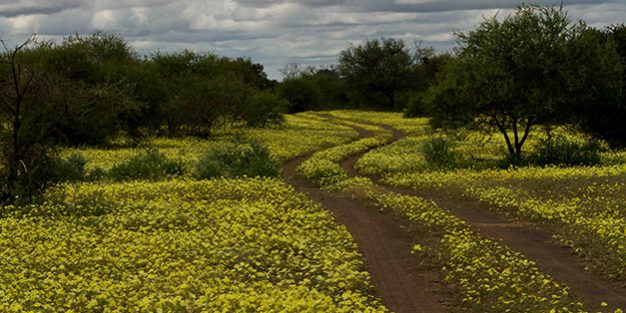 Mashatu is simply bursting at the seams with life. The heavy rains of January have brought about a full flush of growth which will dazzle the senses. Game drives take guests through a sea of fragrant flowers – kilometers of vivid colours against the far reaching expanse of greenery. Looking upwards we see a dazzling spectacle of the migratory birds returning for breeding. Their courtship and song add sound to their acrobatics and flashing beautiful colours.  Some favorites of the season include the Southern Carmine Bee-eater, European Roller, and Secretary bird. A particularly unusual sighting is the appearance of a Crowned Crane which has taken residence in the Vlei. One of our guides, Bashi, who has worked in the area for over 20 years has never seen one before! This beautiful bird has a regal air with its golden bristly crown and vibrant red neck. Its appearance in the Tuli area was recorded as an incidental sighting, as they are generally not known to occur in the region at all.

Looking into the dense ground cover, small movements reveal an array of newly emerged insects.  The brightly coloured Elegant Grasshopper, Armoured Cricket and Golden Orb spider add to the intricacies of the Land of Giants, lifting the senses in preparation for views of larger members of the ecosystem.

The antelope and other herbivores now move in larger groups with young babies staying close to their mothers’ sides.  Large herds have formed, permitted by the abundance of foliage, to build strong boundaries of defense against predators. The early detection of cats increases the chance of survival of the young.  The increased foliage in the open areas has also renewed energy levels among the herbivores.  Impala are found by the hundreds.  Slowly driving through these herds creates a gently rolling sea of amber sheen and white tails. Eland have also come together. From groups of 5 – 10, they can now be seen in herds of between 80 and several hundred.  Their massive bodies en-masse is an impressive sight indeed.

Predators are also seen with cubs at their sides. Two young leopard cubs have become very comfortable with our vehicles. They are regularly found playing together while their mother is out hunting. Washed away trees from the January floods make for perfect leopard jungle gyms (perhaps this is where the name originated?). Two lionesses are also raising nine cubs in the central area of Mashatu.

The three male cheetahs have been seen frequently over the last couple of weeks. They appear to be searching and calling for a female. Their distinct chirping calls are unlike the sound of other cats, but resemble that of a bird’s chirp or a yelp of a dog at high intensity, and can be heard for up to 2km.

Baby elephant tackling the steep banks of the Majali River

Despite a lack of rain in February, there are still many water pools across the reserve that are providing hydration, cooling and support for continued forage supply.  Elephants are frequent visitors here.  The abundance of water allows large herds to gather in a relaxed and social atmosphere. One group was observed in the lower area of the reserve where the babies played around their mothers, the older siblings collected tufts of grasses, and mothers looked on as they nibbled the leaves of flowering acacia.  The obvious intelligence and calm demeanor of the Tuli elephants never fails to surprise guests.  These herds are now seen with up to 300 individuals, yet other groups may remain in smaller numbers where new babies are able to walk at a slower pace.  These small groups remain in contact with members of their greater bond group and will later rejoin the herd.

Another memorable elephant sighting shared with our guests involved a herd of elephants conquering a river bank. With the newly reshaped Majali River, banks are a lot steeper than they used to be. Elephants are not the most acrobatic of animals, but they still try to mount these sheer banks. It is incredible seeing even the youngest of babies successfully tackle this task, even if it may require a little help from mom!