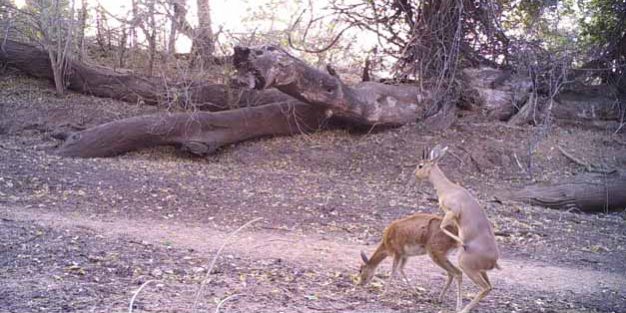 Counting elephants from the air by Andrei Snyman

Game viewing in Mashatu was great during the month of September. Our cheetah sightings were up by 21% (from 26% to 47%), and although sightings for lion, leopard and elephants were slightly lower, what we saw is still considered exceptional. Lion and elephants sightings were 80% each, with leopard sightings at 73%. On the 7th of September a pack of 11 African Wild dogs was seen hunting and killing an impala. The pack was quickly tracked down by our experienced and professional rangers, and it wasn’t long into the morning drive before they found the pack on the move. With at least another two different groups of wild dogs roaming in and around Mashatu, you just never know when you’re going to get a super surprise like this again.

Average maximum and minimum daily temperatures were 35°C and 19°C respectively, and we also had light rain earlier in the month. Cicada Beetles’ sounds fill the midday air – a sound reminiscent of true summer in the bush.

Over 23 kills were found, with some guests just missing out on the actual kill itself. Here is a short breakdown of the kills found this month:

During a recent multi-day aerial game census conducted over the whole 72,000 hectares of the Northern Tuli Game Reserve, it was quite remarkable to see where most of the animals are congregating during these last winter dry times. Kudu and eland herds were scattered all across Mashatu, and most of the grazers (wildebeest and zebra herds) were located around Nel’s Vlei and the Pitsane River. Warthog, ostrich, impala, steenbok, giraffe and many more were also fairly widespread, with waterbuck mostly seen along the mighty Limpopo River. Elephant herds were not distributed over too wide an area, and were mostly located along the major river systems running through Mashatu.

From a recent camera trap survey (a camera trap is a motion censored digital camera, set alongside game paths and waterholes), that forms part of the Northern Tuli Predator Project, some amazing pictures were recovered. Included were a mating pair of Steenbok and one picture of an Aardvark being followed by a Spotted hyena! The results from one of these camera trap surveys reflects the abundant biodiversity that roams Mashatu, and what could be seen out there at any given moment.