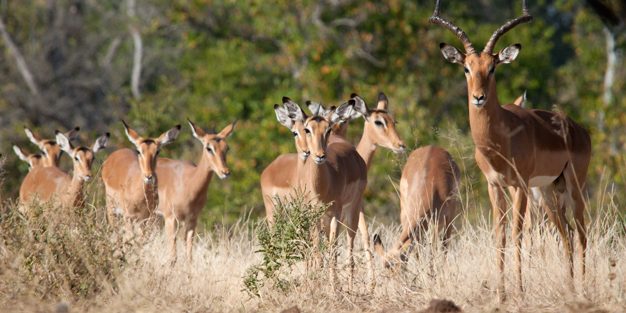 The rutting season is upon us. And with it comes the battle for the strongest, best looking, biggest horned, and most agile Impala.

The bush is filled with ‘roars’ this time of year, but not that of the big and hairy, the roars of dominant male impala. As a male impala seeks  the attention from a female impala he emits a ‘roar’, often accompanied by a loud snorting sound. Oddly enough, the loud snorting sound is what determines the dominance of the males to the females – thus making them fit partners to breed with. During the processes of winning over the female impala, the male becomes so consumed with its natural born instinct to reproduce it slowly deteriorates in its own physical condition, forgetting to feed and groom itself. As its physical condition deteriorates during its noble cause to win over the females, more physically apt male impala make their way into the heard, pushing out the once dominate male. The chase between two male impala’s is a great spectacle, clouds of dust trail the impalas as they battle for their position amongst a heard.

Male impala drinks at a waterhole first, followed by the females

Nature can be cruel, but as we all know it is always a matter of the survival of the fittest. The vocal displays will persist for a few months, and the dominate males will mate – leaving bachelor herds of battered prides and battle wounds.