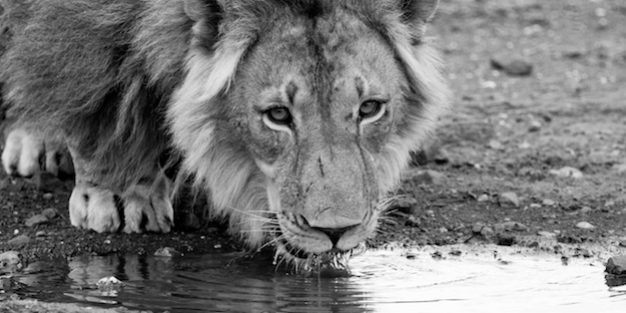 Young lion from the southwest by Andrei Snyman

Although November started off hot and dry, the latter half of the month made up for this by saturating the earth with an impressive 37mm of rain. What made this even better was that the week following was overcast and cooler, which gave the soil time to soak up the water. This was definitely the kick-start the bush needed in order to stimulate the vegetation into growth. A green flush is now evident right across the landscape.

We found a total of 8 impala kills during the month. The leopards were responsible for six of these, while the cheetahs took care of the remaining two. We also came across two eland kills and one kudu kill, all made by lions.

Although leopard sightings have stayed on a par with October (90%), lion sightings have dropped. The reason for this is that a coalition of  younger males moved into the central parts of Mashatu for a while.

Preoccupied by another lioness(s) in the north, Matswane, our resident male lion, has been roaming far and wide within the reserve. His absence subsequently left the Central region’s resident lionesses and cubs at the mercy of the new coalition.  To protect their little ones, the older females moved out of their normal range and onto a neighboring property. However the lionesses that don’t have any cubs yet opted to stay behind.

It didn’t take long for the new boys to win these females over either. As soon as Matswane got wind that his ‘turf’ had been invaded, he quickly made his way back one afternoon to ‘discipline’ (as the rangers here called it) the younger males. After some spectacular chasing and running, the dominant lion then returned to his lady friend(s) up north. Having learnt their lesson, the youngsters made their way back to their old ‘hood in the southwest region of the reserve.

Cheetah sightings have increased dramatically, which is mainly due to the female and her five cubs. As is the case with any female that has dependents, this cheetah mother is fairly restricted in terms of her movements. While not great for her hunting endeavours, it does mean the family of six is seen together fairly frequently, affording guests some fantastic photographic opportunities in the process.

Elephant sightings have also increased now that water and vegetation is more readily available throughout the reserve.