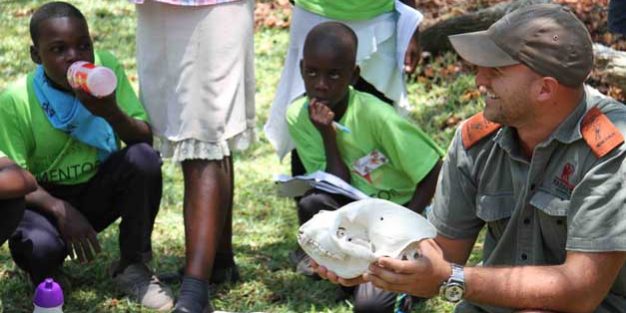 The landscape of Mashatu is in full transition from being a dry and dusty place to a luscious green bushveld. Rainfall has been very patchily distributed with Main Camp and Tent Camp getting 21.8mm and 15.5mm respectively. This is, however, not anywhere near the true indication of rainfall in the area. Some places got in excess of 70mm (from one downpour)! While some areas are still dry and dusty, other places you have to drive through deep water pockets. This month we also saw the Majale River coming down in a flash flood, and the Limpopo River is also flowing, although at a very low mark so 2×4 and 4×4 vehicles can still cross.

Game Viewing was great in November and with the bushveld looking green and fresh after the rains, wildlife photography became so much more interesting. Birds, wild flowers, blossoming trees, water-pockets across the whole landscape and the usual big attractions like lions, leopards, cheetah and elephants kept our keen photographic guests very busy. The smiles and show-and-tell conversations in the famous Gin-Trap bar at Main Camp can testify to the spectacular game viewing at Mashatu. Lion, leopard and cheetah sightings recorded for November were 93%, 97% and 43% respectfully. Elephant sightings were a good 97%. Over 13 kills were seen, with the actual kill being witnessed in some instances, and lions took the ‘lions-share’ of the statistics…

Two Children in the Wilderness (CITW) school groups were hosted back-to-back at Tent Camp. Children from nearby local villages, close to Mashatu, had the amazing opportunity to be treated as guests and learn about the wonders and splendour of the African bush that we all share. As part of the programme to teach the children, researchers from Mashatu all took part in different afternoon sessions with the kids. Fun and entertaining exercises, ranging from identifying insects, handling and touching live snakes, learning how to radio track a collar and many more exercises were incorporated into the lessons. A comprehensive report will follow soon.

Drought and Elephants Moving through November

It goes without saying that we are in one of the most significant droughts in “a long time”.  When speaking to long-time residents, game drivers and managers within the NTGR, some say the drought has lasted twenty years and others suggest over fifty years, but the response is always in consensus that this is a significant dry period for the Northern Tuli Game Reserve. It is difficult to gauge the severity of any extreme climate condition during the event. Once the condition shifts or enough time has passed for the effects to be observed and measured, the comparison to “normal conditions” may then be evaluated. Now that the drought has persisted over the last year through several “seasons”, it has become clear that the wildlife, plant life and soils binding the system together are severely affected by the lack of rainfall.

The unforeseeable duration of the drought and its consequences on species diversity and ecosystem function is yet to be seen. With drought conditions in general, we expect short term effects to show increased fitness of carnivores and a decline in numbers of herbivores due to lack of forage and increased susceptibility to predation. Moving to a more long term view of severe drought affects historically in Notugre, there is a likelihood for decreased species abundance, and potential loss of diversity. Predators, now with young, are well suited to reap the benefits of increased food supply. However, decreased numbers of resident species and likely emigration of herds carry long-term implications for carnivores as well. Grazer populations already desperate for grass may be pushed to the brink survival, and browsers that have already left their marked “browse line” across the landscape are likely to move in search of stable food sources. These processes affect many more components of the ecosystem. For instance, birds and insects that rely on vegetation and animal activity may also be impacted. One herbivore stands out above the rest for its role as a keystone species, affecting the proliferation of others species and influencing landscape structure.

The current elephant research project is working to understand the implication of drought, its affects on elephant herd movement and social dynamics, and potential facilitation of other browsers (by reducing forage height and increasing shoot production at branch tips) and competition to younger elephant age classes by browsers (feeding at similar height to young and newly weaned calves). For instance, recorded mortality has increased in the last two months with three recently weaned calves in the 3–5 year age class, one calf under 2 months, and a possible matriarch, female between 45–50 years old having succumbed. The older females with well worn or lost teeth face a challenge to acquire enough nutrition from dry forage materials. Monitoring these details contributes to study objectives gaining understanding of movement and habitat selection in response to drought conditions, and the implications for adjacent land managers and planning considerations for the TFCA.

Elephant activities over the course of November varied in response to diminishing rainfall.  The month of October brought several herds into the vicinity of Mashatu Main Camp. Their movement from the southern portion of the NTGR was spurred by a burst of new vegetation responding to the initial start of the rain season. With the marked decline in rainfall over the course of November elephant movements have varied between families, bond groups and larger herds. Those that have remained in large groups are faced with the challenge of finding forage, and increased peak temperatures necessitate more frequent attendance at water sources. Herds with older matriarchs stand a better chance to source water and food resources, while the younger will build references for future dry periods.

For now the elephants will continue to move about in groups of various sizes and their need to remain near water and forage resources will remain high. With limited natural water sources they begin to modify their home range use, moving to new locations as necessary. The large herds which frequent the Motloutsi River during the winter months were noted leaving the area near early-October, at which time the subsurface water flow, usually accessible throughout the year, became dry. One of these herds was observed in the sage area of the Mashatu Reserve, and soon continued its movement east along the Limpopo riparian corridor. From October into November elephant movement then spread further from water as forage opportunities increased due to rainfall.

This month many herds that have ventured further north. One spent time close to Mashatu Main Camp, visiting the camp water hole several times a day for a period of over ten days. This group behaviour occurred toward the end of a dry period extending over several weeks. The visiting herd consisted of several bond groups, totalling over 70 individuals which arrived in stages of family units. The forage consumed on site illustrates the severe condition these animals are contending with in the wild areas away from camps. The herbivory in areas where water is supplied by artificial means, creates an opportunity to forage more heavily before leaving the area. Consequently, elephants in these conditions heavily browse the hydrated vegetation that otherwise would not be exposed to such a level of pressure. Typically bull elephants and occasionally females will consume bark and roots of trees, but this behaviour is tied to the end of the winter/dry season when conditions become at their most critical. During their visits to the waterhole, several groups positioned themselves around trees to collect bark from larger trees with greater water consumption. The concern is that these groups consisted not only of adult males, but also an equal number of adult females, and juvenile males and females as young as 5–7 years old. Because there is so little nutrition available at the moment, these trees are providing an option to malnourished individuals. Then after raining one day, the large herd moved on, perhaps with the expectation of more widely available forage opportunities.

Management under these conditions can be challenging, and research without land manager communication often creates more questions. I encourage taking a management approach that bears in mind both short term and long term objectives, to plan strategies developed from relevant, preferably local, data. For instance, reducing erosion promoting activities and proactively taking measures to retain areas of existing nutrient rich soil will be surprisingly helpful to maintain vegetation communities supporting wildlife species abundance and diversity. Despite the challenges faced by wildlife to survive in drought conditions, there is a great deal of hope to be levied. The beauty of the landscape still holds promise for the wildlife, and we, consisting of the Northern Tuli Game Reserve, have a great opportunity to act with foresight, to proactively take measures which will reduce potential long term impacts of drought on the landscape and animals that we and many tourists have grown to admire. Let us look forward to December and the new year to follow.

Read our Cheetah updates for November:

November brought about some very good leopard sightings. Mashatu has some extremely relaxed leopards that allows for some excellent photographic opportunities.  Guests have had the opportunity to view very young leopard cubs, a rare sighting! The mother, an old female, has made a den in a hollowed trunk along the Majali River. A more elusive leopard, Pitsani, was tracked down on a Predator Research Drive. He was seen mating with a female.

The two female lions with cubs were seen almost daily. They have taken residence around Majali Island, but frequently relocate their den site. The two sets of cubs are often seen with them at kills.

There are numerous jackal pups around at the moment. They are particularly inquisitive and often come investigate the vehicle from a safe distance.