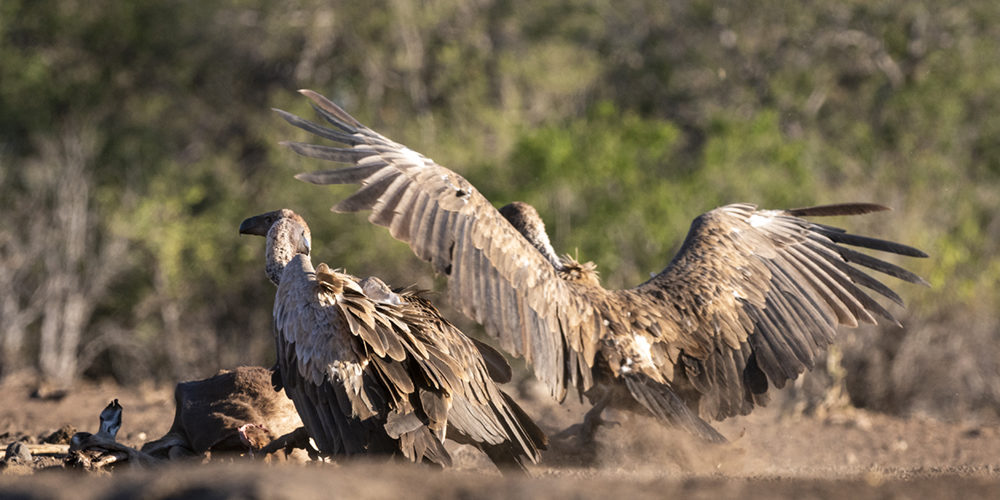 “When vultures, watching your civilization, begin dropping dead, it is time to pause and wonder” – David Brower, environmentalist and founder of Friends of the Earth.

Vultures get a bad rap from many people, yet these much-maligned birds have evolved to fill a crucial role in the ecosystem. We’ve had a long and hot dry season here at Mashatu Game Reserve and as the season draws to an end, the older and weaker animals don’t always make it.

It does not take long for the bodies of these animals to start to decompose but thanks to vultures, jackals and hyenas the carcasses disappear within no time, eliminating the risk of disease outbreak. 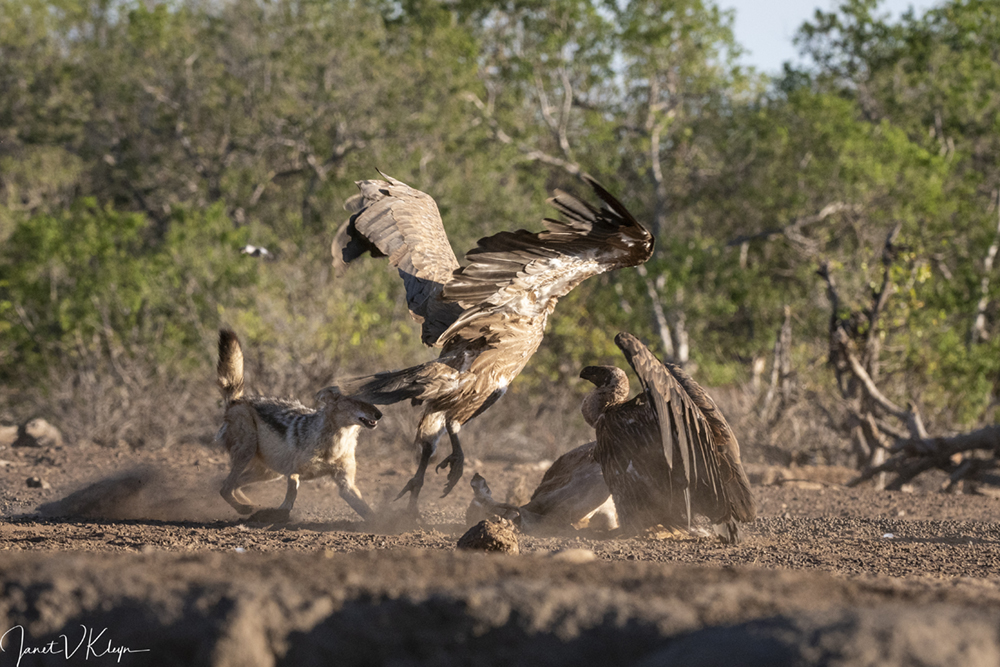 Recently an old female impala took her last breath at the waterhole at the PhotoMasahtu hide. We found the carcass in the morning and by the time we returned for the afternoon session there was already a group of white-backed vultures enjoying the free meal on offer. Before long they were joined by a lappet-faced vulture, the “king of vultures” with its mighty bill, perfectly suited for tearing the skin.

There’s an interspecies hierarchy that exists between the various species of vultures.  Top of the pile is the powerful Lappet-faced vulture, the only species able to eat the tough remains such as the skin, tendon, hair and ligaments.

The frenetic white backed vultures tackle the softer flesh and organs using their specialized grooved tongues with sharp serrations. With this much competition, they need to get their share and move out as quickly as possible. It’s a dangerous business as they risk getting trapped inside a carcass and being eaten. To aid them they’re able to fill their crop up to 1 kg in 2-5 minutes.

The hooded vulture’s meal of choice is the softer organs like the eyes and intestines.  Being low down in the pecking order it will hang around the edge of the feast, snapping up at any scraps that make it their way.  Once all the others have had their fill they use their specially adapted small bills to probe into the remaining crevices to clean up the last bits.

With each species adapted to feed on a different part of the carcass, there is little open hostility at a food-source.  But this particular party received some unwelcome guests – two black backed jackals. The vultures put up a good fight; flying and diving valiantly at the gatecrashers trying to chase them off.  The jackals managed to create a sufficient clearing to get in and have a quick bite before leaving and taking a snack with them. 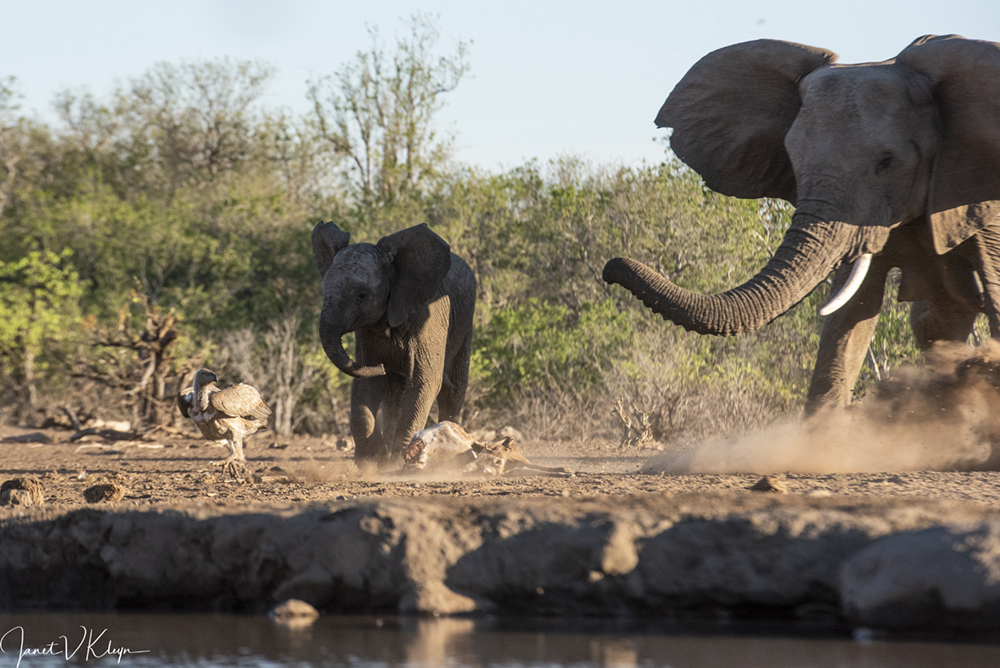 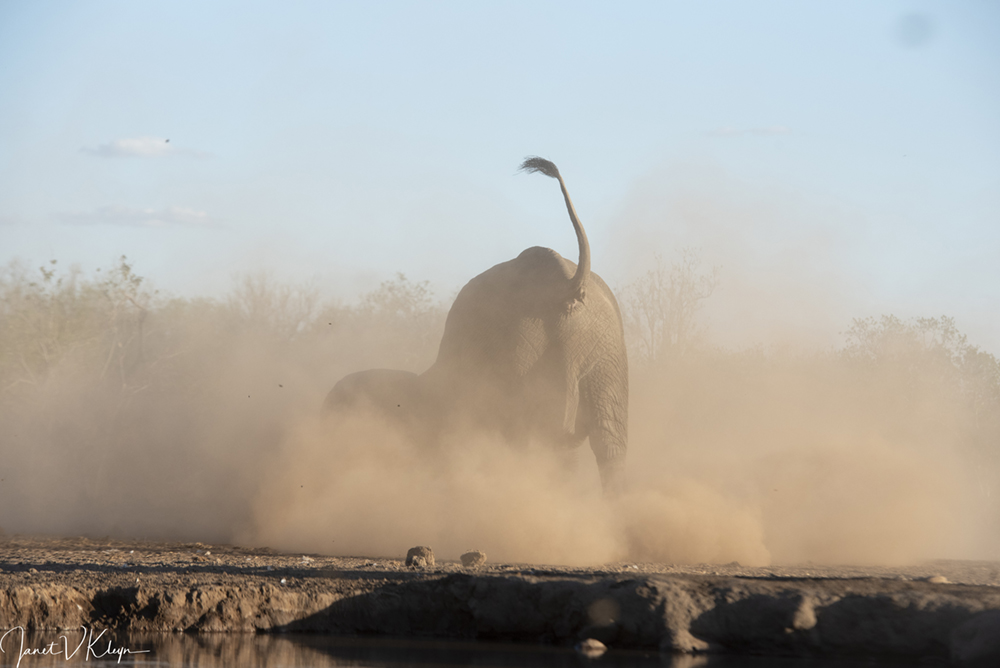 Just when we thought we’d seen all the action some elephants arrived on the scene. They took great exception to the presence of the vultures and ran at them trying to chase them off. One matriarch was so incensed she even trampled on the carcass spreading it around. The vultures simply moved off a safe distance and came straight back after the elephants left.

When we returned the following morning there was no sight of the remains of the poor impala, a good clean up job by the vultures and jackals indeed.

Text and Images by Janet Kleyn.