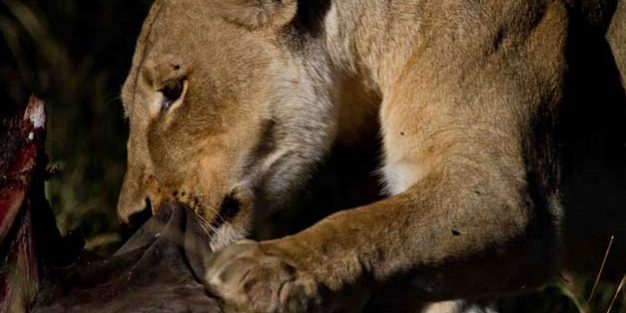 May proved to be another good month in Mashatu for lion sightings. The coalition of three males roaming the western side of the reserve was seen less often. One of the three males has a SAT (satellite) – GPS collar on and this allows me to follow their every day movements. These new SAT collars send their location every few hours – regardless of where they are – to an online server. In the past we relied on cell phone-based GPS collars, but the lack and patchiness of cell phone reception made consistent monitoring impossible.

We saw the central pride very frequently during May, and in the last week of the month they managed to bring down an adult eland bull. Even more surprising was that when the guests went back past the lions after sundowners, some 30 minutes later, the pride had killed an impala not even 100m away! This clearly illustrates the opportunistic nature of these big cats. Whenever an opportunity arises they’ll take it.

Leopard sightings were good during May. We saw a female with small cubs in the central region, as well as Pitsane (a large male) feeding on an impala kill. Other leopard sightings were also prevalent in and around Mashatu. Pitsane’s radio-collar had to be replaced because it was faulty. The only problem was that nobody could find him! After weeks of setting out baits and cage traps I was finally rewarded when rangers found him with a kill in a large Mashatu tree. Later that evening we returned to the site and successfully replaced the broken collar. The map below depicts his movements, as well as those of two other male leopards that have also been collared as part of a research project. Each dot represents a GPS location. Note the territorial boundaries between the different males.

We enjoyed a few good cheetah sightings, although they weren’t as abundant as in the previous two months. These carnivores are wont to utilize large home ranges, which can make it difficult to estimate their movement patterns, exact territory boundaries, and key areas of living. These are normally determined by having animals either followed on a continual basis or by placing collars on some of the individuals as part of an in-depth research study.

We found three active spotted hyaena dens. Two of which are near the Old M1 crossing at the Majale River. On various mornings guests had the opportunity to view these amazing carnivores interacting with their small, still black cubs. As the adult hyenas are very relaxed around the vehicles, and even the odd cyclist riding by, they hardly even take any notice of us watching them. A good opportunity indeed for amateur and professional photographers alike. Visit our Facebook and Flikr albums to see more photos.