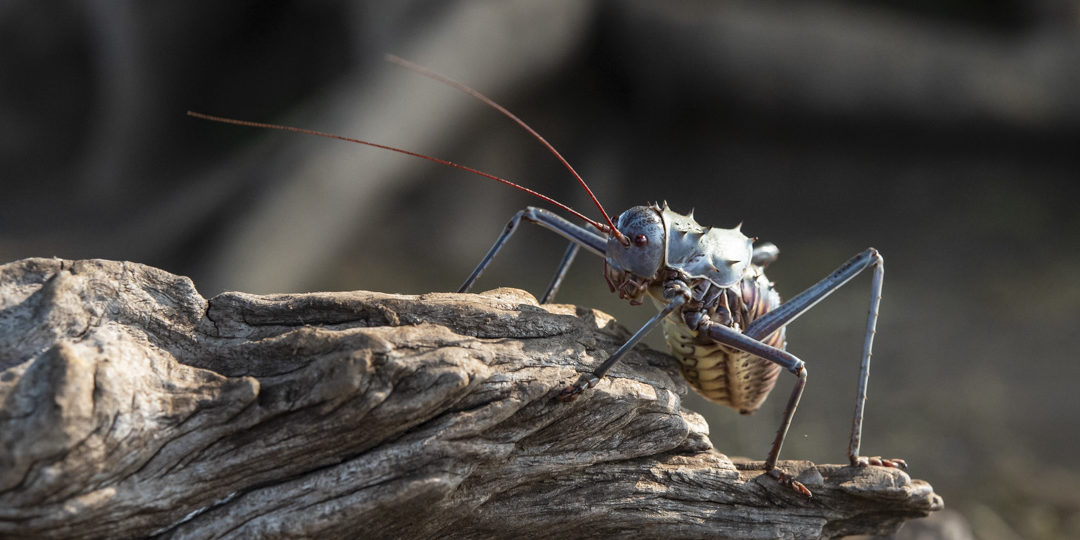 Mashatu is home to no less than seven of Africa’s ‘giants’ – elephant, lion, giraffe, baobab tree, eland, ostrich and the kori bustard.

But we have an eighth giant that is prominent every summer – the armoured cricket.  Up to 5cm long, these fat and flightless crickets may not be the prettiest to look at, but they’re an attractive meal for a wide variety of species. Many bird species, particularly a variety of storks arrive in their thousands to feed on them.

You’d think it would be difficult to strive as a species when so much is feeding on you but fortunately, they have several defence mechanisms at their disposal which are used depending on the sex of the cricket and the method of attack.

As their name suggests they are well-armoured with a strong exoskeleton, which provides some protection. In addition to that, their thorax is covered in sharp spines. They have strong jaws with which to bite and both sexes will attempt to bite if attacked. 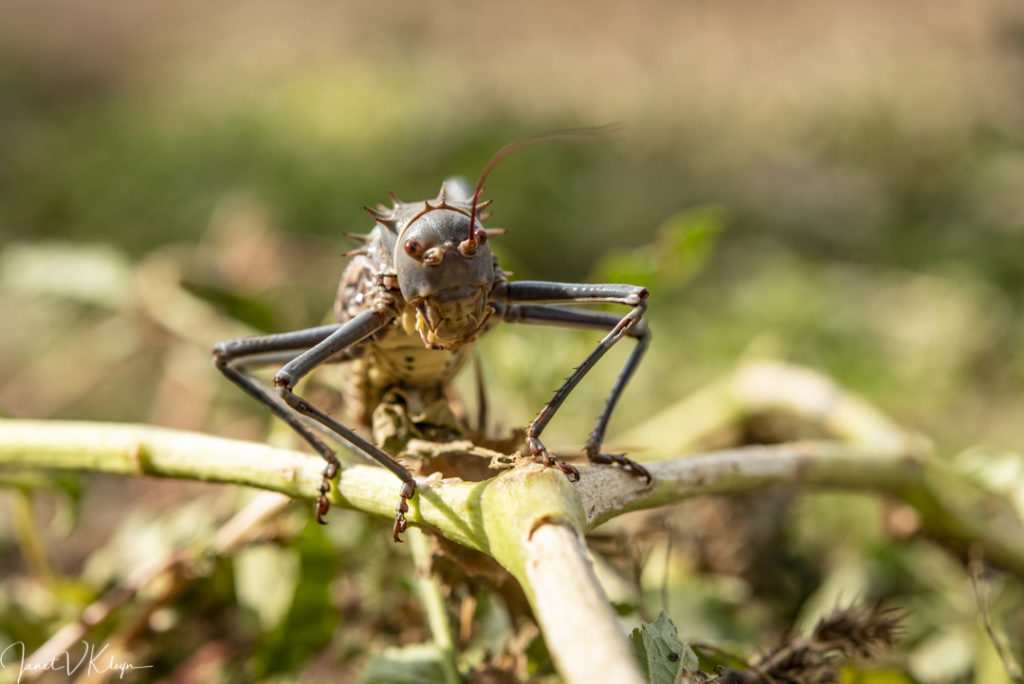 Males use stridulation as a defence, creating a loud, harsh noise by rubbing parts of their body together to either scare off predators or warn them who they’re messing with.

If the scary armoured body and the screeching noises don’t deter predators, they have more ammunition to unleash. They can squirt haemolymph (insect blood) out of seams in their exoskeletons up to 6cm. The haemolymph is pale yellowish-green, acrid-smelling, and distasteful – surely enough to scare off anything that wants to eat it?  Not necessarily so. If all of these fail to deter a predator, the armoured cricket will regurgitate their stomach contents, covering their bodies with their vomit.

Unlike many species, where females are the choosy partners, male armoured bush crickets are the fussy ones when it comes to picking a mate. Male crickets prefer skinny, young virgins as they will father more offspring with them. A female must mate before laying her first clutch of eggs, thereafter she may mate and lay eggs again in any arbitrary order, as she can store sperm. By mating with a virgin, the male is guaranteed that a higher proportion of the offspring will be his.

Males give females a large nuptial gift called a spermatophylax, a large package of food, together with their spermatophore (a bundle of sperm contained in a protective package) which is an energetically costly gift. Males will not be able to mate again until a new spermatophore has grown while their females counterparts will be ready to mate again within about 12 hours.

Summer is almost over and the mating has taken place. The adults will die after laying their eggs and the nymphs will hatch again next year after the first rains. The many birds that feed on them will disperse but we know they will return when the next generation of Mashatu’s eighth giant emerges to complete the cycle.

Mashatu is home to many species, big and small, beautiful and ugly and we cherish them all.