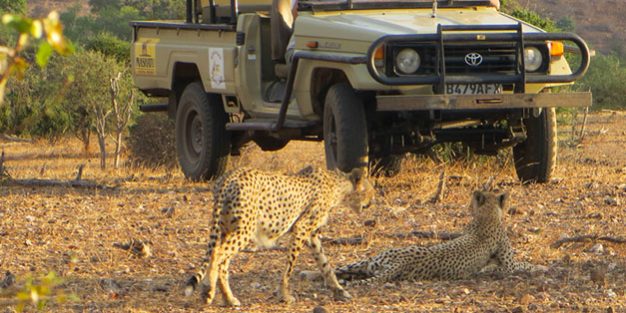 The Tuli may be known for its large herds of elephants with open dusty plains and sandstone koppies but it is also home to a diversity of species all uniquely adapted to survive and compete in this harsh environment. Cheetahs, unchanged for over 3 million years, are amongst the most highly evolved of the big cats. They are most well known for their specialised design which allows them to hunt at extremely high speeds. A less obvious adaptation, but nonetheless essential for survival, is their adaptability to local conditions, where larger more dominant predators will not only out-compete them but aim to do them harm.

Cheetahs surveying the distance at Mashatu

Cheetahs have succeeded by utilising a niche that is somewhat limited and thus avoided by the larger predators. By selecting habitats with fewer resources and hunting during times when other predators are less active, they have lowered the risk of coming into conflicts and losing their kills.

Cheetahs in the dust

The Tuli is home to a free-ranging population of cheetahs. Their movements in and out of the reserve are unrestricted and so they not only have to survive the demands of their natural world but need to adapt to an ever growing human population that is expanding into their natural range.

During my research on the reserve I came to know and follow one particular female. When I first saw her she was accompanied by five young cubs. At first they were nervous around vehicles and we had to give them plenty of space but over time they grew used to the presence of my research vehicle and game drives and became regular ‘stars’ on Mashatu. At first she was known only as ‘the female with five cubs’ but was later named ‘Mapula’ for her success at raising such a large litter in such an unforgiving environment. Cheetah cub mortality in the wild is extremely high in the first few months of their life with up to 90% mortality before they reach maturity and so it is a rare sighting to see 6 fully grown cheetahs.

Her skill at hunting and raising her family was somewhat extraordinary and as I followed her and observed, I began to learn from her what it takes to be so successful.

Cheetah cubs in a tree

Hunting involved meticulously calculated positioning, endless patience and total concentration. She would keep her eye on her prey at all times, often pausing mid stride to avoid being detected. She could spend well over an hour stalking only to abandon the hunt if disturbed by the arrival of a herd of browsing elephants or a lone hyena making his way back to his den. Her cubs, always eager to take part, would often lose patience and give away their presence, but her perseverance was always well rewarded. A successful hunt, however, did not always mean a full belly! Upon killing her prey she would quickly drag it out of sight and her cubs would feast as quickly as possible while she scanned the immediate area for scavengers. Although all carnivores are capable of bringing down their own prey, including spotted hyenas, a free meal is never turned down and when you are at the bottom of the pecking order you have to always keep an eye out for these bigger bullies. I have witnessed a single hyena chase off this family of 6 cheetahs as they had just caught an impala ram. Mapula immediately retreated knowing that the risks involved in putting up a fight was not worth the meal.

As I continued to follow her I witnessed the succession of life as one litter was raised and left her side to give way to her new litter only a few months later. In search of a den site to safely raise her new cubs she moved to a rarely visited area of the reserve. This habitat consists of thickets of mustard bush with very little ground cover. It is much drier and less fertile with fewer animals, in other words, the perfect habitat to raise vulnerable cubs. The low prey density means fewer chances of coming into conflict with hyenas, leopards, and lions and the thick mustard bushes were perfect den sites as their low branches reaching the ground provided her young cubs with shade and concealment. The sweet smell of the mustard bush flowers possibly also masked their smell. She was a cautious mother and took every precaution to ensure her cubs’ safety; this involved moving them to new den sites frequently and consuming their excrement to hide their scent. The need for food is the only reason she will leave the cubs unattended as without her presence they are entirely defenceless. Although their survival instincts are deeply engraved, this early stage of life is the most dangerous for cheetahs as they are vulnerable to a number of threats. Self-preservation relies heavily on their camouflage, remaining motionless as to remain unnoticed and if discovered their instinctive response is to run quickly in different directions. This scattering behaviour effectively increases individual chances of survival as a predator would inevitably only follow and catch one cub out of the litter. Within 6 weeks the cubs are capable of following her but the danger is still high as they have yet to develop the high speed required to escape danger.

Hunting is mostly learned through play; stalking, chasing, pouncing and biting are all part of their games, while passive learning is obtained by observing their mother. Every encounter with a threat, whether with another predator or a herd of elephants, is effectively teaching them how to react to different situations. When encountering something new their initial instinct is to treat it with caution and even fear while observing their mother’s reaction. An encounter with a vehicle was immediately seen as a threat to these new cubs but their mother is well habituated to the sight, sound and scent of game drives and her relaxed pose quickly rubbed off on her cubs. This loss of fear has been learned with time and continuous positive re-enforcement that vehicles pose no threat.

Although Mapula has no fear of humans in vehicles in the reserve, she still treats human settlements beyond Mashatu’s boundaries with caution. Her concern in this respect is wise as farmers with livestock do not tolerate the presence of predators and may seek to do them harm. Whether she learned this from experience or from her own mother is unknown but she will pass down this knowledge to her offspring as they will to theirs’. Although she is free to move out of the reserve she favours the safety of the reserve and  other areas where there are few humans. Unguarded livestock is easy prey for free ranging predators, but hundreds of years of persecution from humans have taught them to avoid human settlements. Nonetheless conflicts with predators are extensive and inevitable as the ever growing human population encroaches on the boundaries of protected areas, the size of which are insufficient to sustain populations of wide ranging predators such as the cheetah.