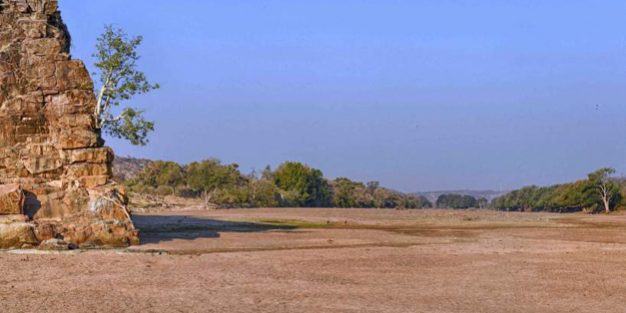 This is the third post from our recent trip to the Mashatu Game Reserve in mid-September. Mashatu is part of the larger Northern Tuli Game Reserve which is located in the south eastern corner of Botswana at the confluence of the Limpopo and Shashe rivers. Mashatu is bordered by the Motloutse, Shashe and Limpopo rivers. This area has historically been referred to as the Tuli enclave. Tuli is the Tswana word for “dust”. This is a low rainfall area which can be very dry during winter, a time when the dust in the air creates sunsets which makes the sky look like it is on fire. While Mashatu is most often known for its diversity of wildlife and birds, it is a land of spectacular landscapes with big vistas, big skies and giant trees. This is a wilderness of mopane bushveld, riverbeds lined with massive Mashatu, Leadwood, Fig and Jackalberry trees, croton forests, a huge marshland and rugged Karoo sandstone cliffs and basalt formations.

This is a place rich in stories embracing history and mythology, which include such memorable names like Mapungubwe, the Zhizo and Leopard Kopjie people, Cecil John Rhodes, Bryce’s store, Zeederberg Coaches and Rudyard Kipling’s “Elephant Child”.  Tuli also saw F.C. Selous lead the Pioneer column through it into Matabeleland. The Zhizo people were the earliest known culture to have inhabited the area about 1200 years ago. This region also staged the opening conflicts between British and Boer forces during the Second Anglo-Boer War of 1899 to 1902.

Then the Kolokolo Bird said with a mournful cry, “Go to the banks of the great, grey-green greasy Limpopo River, all set about with fever-trees, and find out.”

For those of you who are familiar with Mashatu, travelling east on your way down towards the Majale river. There is a hill which we sometimes stop on to have a sundowner and watch the sinking sun set the sky ablaze with reds, yellows and oranges. This particular morning it was early. We left the lodge at 6h00 and the sun was just starting to rise above “excavation hill” – my name for it. This is the site of an earlier archaeological dig. The colours of the sky at that time of the morning were soft pastel tones of pinks, and blues. A time when the bush is quiet while the morning sun slowly paints colour into it.

After game viewing around the rivers for the first part of the morning we usually turn back to the lodge for breakfast at around 9h30 . The next image shows one of the dry river beds we pass with a huge Baobab tree guarding its right bank. You can see how dry it was in mid-September.

Another image of the transition zone as you make you way down to the rivers. The grass was a beautiful blonde colour, ideal for hiding lions.

On the last day of the trip, we drove to Soloman’s Wall and Mmamagwa Hill. On the way out you pass the Mashatu main camp and drive on a low level concrete bridge over the Bojale river. Stopping on the bridge provides a wonderful view west and east, up and down the river. There was a surprising amount of water around for early spring. A family of Saddle-billed Storks was foraging in the pool on the left. The male and female were feeding their very noisy Saddle-bill Stork chick.

You have to travel west to the main road from Ponte Drift to the nickel mining town of Selebi Phikwe, which has a gravel surface but is the width of a highway. You pass through a corridor of land which is owned by the Zionist Christian Church down to a ‘foot and mouth’ control gate. You are required to get off your vehicle and walk through a chemical pan while the ranger drives the vehicle through a shallow chemical dip. Suitably disinfected, we travelled on to a major four way stop. The sign showed Zanzibar straight ahead. Favouring a shorter journey, we turned left down towards Solomon’s Wall. On the way you get a glimpse of Mmamagwa Hill on the left hand side and Mapungubwe Hill on the right hand side. The countryside is rugged. The next image shows the Mmamagwa Hill to the left.

A few kilometres further on you come to the Motloutse river which flows south into the Limpopo. The Motloutse river is big  river of sand for most of the year. There are two large basalt buttresses either side of the river and are the remnants of Solomon’s Wall, so named because it is a basalt dyke, about 30 metres high. It once formed a natural dam across the Motloutse river. In yester year, a huge lake filled up behind this natural dam wall, with a waterfall spilling over the dyke during the rains. It was in the sands higher up the Motloutse river that the first alluvial diamonds were found in Botswana. The next image shows a view looking down the Motloutse toward the Limpopo river just before the hills in the distance.

It is hard to imagine that this river can transform into a deep fast flowing torrent which bursts its banks in the rainy season. After having a good look around Soloman’s Wall with fig trees growing out of its heavily, fractured and weathered structure and wondering about the seasonal transformations this river goes through, we travelled back to Mmamagwa Hill to see its sentinel Baobab.

The Motloutse Ruins are fortressed on the apex of Mashatu’s Mmamagwa Hill. This was once part of the royal dwellings of the rulers of the Leopard’s Kopje Dynasty – the forerunner of the legendary Mapungubwe Empire, southern Africa’s first kingdom.   At the height of its reign in AD 1200, this dynasty developed into a powerful Iron Age mining conglomerate. In the valley below Mmamagwa Hill, the tribe’s people smelted copper, iron and gold which they traded with Arabs who had docked on the Mozambican coast and sailed up the Limpopo River in dhows. The archeological remains of this empire can be seen east of Mashatu at the Mapungubwe World Heritage Site in South Africa. The next image was on taken on Mmamagwa hill looking north-east along the sandstone ridge of hills in the soft evening light.

On the sandstone buttress of Mmamagwa Hill facing west is a large Baobab. The top broke off many years ago but the tree lives on. The tree still has Cecil John Rhodes initials carved in its trunk. The tree has mostly healed and covered up his initials but you can still make them out. While you sit quietly awed by the vista in front of you, foraging Elephant Shrews may come to visit. Our ranger indicated that the Mapungubwe Hill out to the west is considered a sacred place. There are also parts of the Motloutse Ruins which are considered sacred by the local Tswana people who insist they are a holy shrine where no mortal should dare to go.

When you are on top of Mmamagwa Hill looking out, a sense of the  sacredness envelopes you, stirring your imagination.

It is worthwhile waiting for the sunset when you are on top of Mmamagwa. The sunset, especially in winter and spring, can be breath taking.

“The pale stars were sliding into their places. The whispering of the leaves was almost hushed. All about them it was still and shadowy and sweet. It was that wonderful moment when, for lack of a visible horizon, the not yet darkened world seems infinitely greater—a moment when anything can happen, anything be believed in.” ― Olivia Howard Dunbar, The Shell of Sense

With the sun having set about 20 minutes before, we heard Jackal and Hyaena begin their nocturnal chorus and decided it was time to get down the hill back onto the vehicle. Looking back up at Mmamagwa Hill in the fading light, there is something about this place that sends shivers down your spine  – perhaps the echo’s of centuries of civilisation.

“You become even more aware of landscape as a medley of effects, a mingling of geology, memory, movement and life. The landforms remain, but they exist as presences: inferred, less substantial, more powerful…

– Robert Macfarlane The Wilderness within

Explore, seek to understand, marvel at its inter-connectedness and let it be.