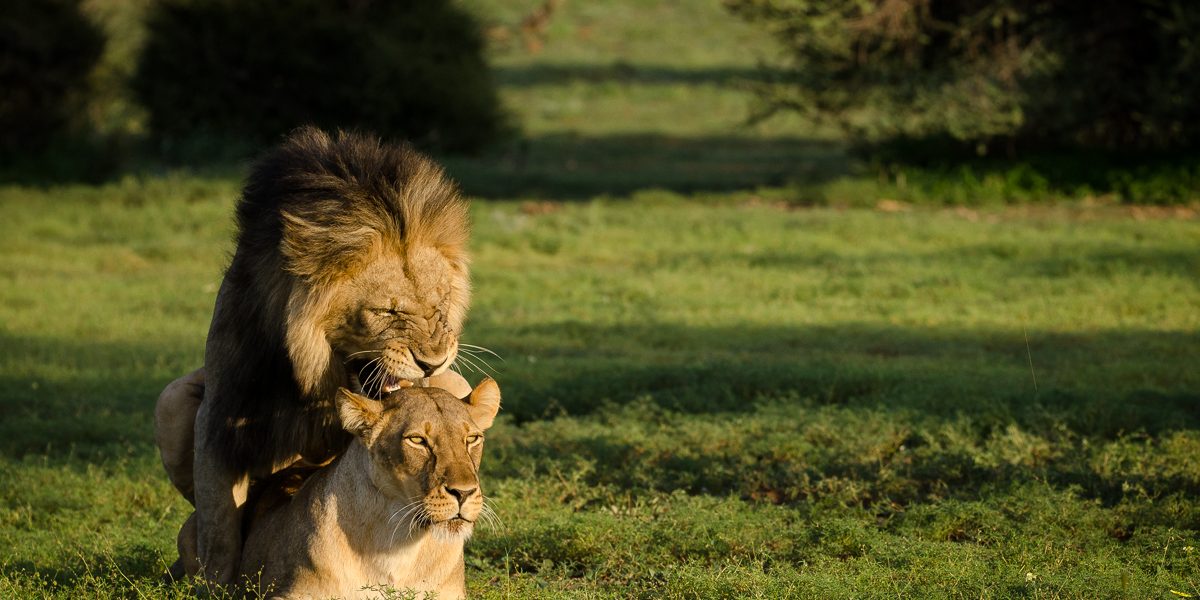 It may be hot, at this time of year, but no negative could out way the extreme beauty the bush radiates at this time of year. So green and lush, dotted with yellow flowers, large nurseries of young huddled together, and of course a beautiful flowing river.

The following images where taken on yesterdays game drive through Mashatu Game Reserve. We where lucky enough to find Kim Wolhuter, our resident film maker, with a pair of mating lion. The very regal looking Zimbabwe male, who is usual part of a duo, seems to be frequenting the reserve, particularly in search of his female companions. Over the past few months however, his other not so good looking half, has been missing in action, his whereabouts are unknown at this point.

Almost ever wildebeest, impala and warthog have young at the moment, and are desperately trying to rear them to a sizable age before any predators single them out. Actually, as I write I have a team of miniature warthog trimming the grass that has shot up in front of my house since the last rains.

On the leopard front, there has been a very young cub spotted by one or two of the rangers, far west on the reserve. Pictures to confirm, should hopefully follow soon.

The green season is truly a time of plenty at Mashatu, every nook and cranny on the reserve is just thriving with life!

One of the Zim brothers, and a lioness meet up for the second time in 2 months

Lazy afternoon in the shade

A new born baboon, looks curiously at the photographer …

Baboon feeding furiously on the tribulus, while it lasts

An old boy, contemplating life, and enjoying the last few rays of the beautiful summer day

The brightly coloured Carmine Bee-eaters, are found dotted all around the reserve at the moment

The very handsome Zimbabwe male, who we have been delighted to have hosted on the reserve a fair amount over the past few months!

Adding a bit of sun protection…

Text and photographs by: Ruth Nussbaum

Lion Love
July 30, 2015
Our Latest Wildlife Posts
Go to Top
This website uses cookies to improve your experience. We'll assume you're ok with this, but you can opt-out if you wish.
Cookie SettingsAccept All
Manage consent