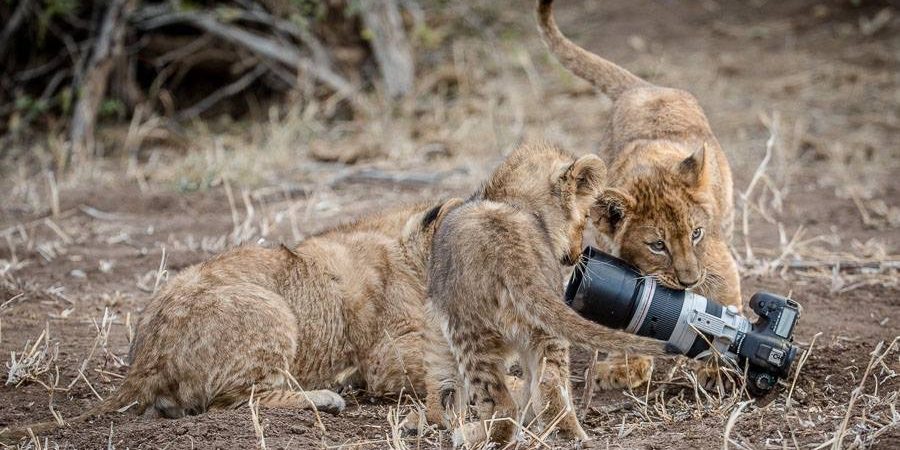 “The Lion cubs are taking selfies” was a call put out on the radio to the other guides during a recent game drive.

It’s something that can happen so quickly and is probably every photographer’s worst nightmare. It was a split second and Photo vehicle guest, Barbara Vorster, had let her camera slip out of her hands and on to the ground.

Just a few meters away were two lionesses and their young cubs playing. One of the lionesses instantly glared at the camera. Our guide, Spike, wasted no time in quickly reversing, as he apologized to Barbara, explaining that we’d have to move away from the camera for now.

As soon as we moved away a bit, the lioness relaxed and she sauntered over to the camera. After a quick sniff, she very gently picked it up with a very soft mouth and started walking off with it, looking proud as she carried it. The cubs were all in tow looking curiously at the potential new toy. After a short distance, she delicately put it down for them to play with.

Like all young children, they played for a while but soon became bored and moved off to go rest in the sun. Fortunately they moved well away and we were able to retrieve the camera.

We await feedback from the professionals as to how much damage was done, but externally it looks perfect, except for a few teeth marks on the live view screen… a reminder that this camera has an exciting story to tell.