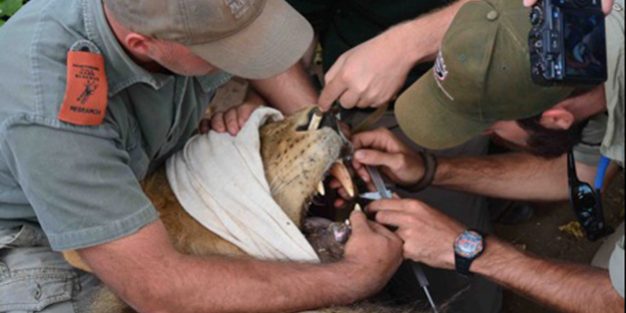 Most viable large carnivore populations in Africa are now restricted to protected areas. African lion (Panthera leo) populations have been particularly hard-hit in recent decades, with many lion populations being restricted to small reserves geographically isolated from each other. Lions have vanished from over 80% of their historic range, and it is estimated that in the last decade lion numbers have declined from 200,000 to less than 35,000.

Lions are currently listed as “vulnerable” on the International Union for the Conservation of Nature Red List of Threatened Species. In a comprehensive inventory of lion populations, Bauer and Van Der Merwe (2004) document 89 extant populations across the African continent. Of these, 50 have an estimated <100  lions, and  33  contain <50. Lions  are thus dependent on the conservation of  small populations across their distribution, and conserving small populations is fraught with inherent challenges.

Today, many lion populations are restricted to small reserves geographically isolated from each other. This introduces difficulties for conservation managers, as small populations are slower to recover from stochastic events and genetic diversity is often limited. In Southern Africa in particular, many small populations have been fenced in an attempt to allow lions to persist in a human dominated landscape. In the absence of external human-induced  mortalities, lion  populations have the potential to rapidly increase in size. In unfenced reserves, animals  may attempt to disperse when populations attain higher densities, but these   animals are usually killed when surrounding land uses are incompatible with large predators.

Between the 13th & 17th of June 2013, four lions and one leopard were successfully captured as part of an ongoing large carnivore research project. The reason for the five captures was to remove, replace and fit new satellite GPS radio collars. Due to the largely unfenced nature of the Northern Tuli Game Reserve, satellite GPS radio collars enables researchers to monitor the spatial and temporal characteristics of study animals on a daily basis.

Moments before we darted Duma

With the assistance of a student group from the University of Georgia, the rather long ‘to-do list’ of tracking, darting and collaring five specific big cats was underway. To raise the stakes even higher, all of the intended captures had to be done in only three days! After very long hours (often working for 18 hours at a stretch) I am very pleased to say that all the captures were successfully done without incident.

Will Booker and I replacing the radio collar

Lions captured included a new coalition of male lions roaming the south-western region of the reserve, Matswane (the famous one-eyed male lion), a resident lioness known to frequent the property between Talana Farm, Lentswe Le Moriti and Mothlabaneng Village and the resident coalition of males living in the Central part of the Northern Tuli Game  Reserve. Due to the size of lion territories, their prey requirements and the potential danger they pose to unprotected livestock in surrounding areas, the newly fitted  radio  collars  will  enhance  our  understanding  of  their  spatial  and  temporal movements  and  activities. It  will  also  enable  management  to  react  in  a  pro-active manner to reduce potential livestock – and human – risk. But most of all, these new collars also act as a sense of security for the well-being of each individual as any poaching incident will not go unnoticed. A radio-collared lion is far safer than an uncollared lion roaming outside the protective borders of the Northern Tuli Game Reserve.

The 5th and final capture was that of a large male leopard – Pitsane, who roams the riverbeds and tall grass of Central Mashatu. We removed Pitsane’s radio collar, which marks the end of an era for this leopard and essentially closes the book on leopard spatial and temporal ecology in Mashatu.

University of Georgia students taking measurements of Pitsane, the leopard

I would like to thank Mashatu, David Evans and Pete Le Roux, for their support in this project, and also a huge thank you to the NTGR Exco board members for approving this and allowing the continuation of this research. Thank you also to the Department of Wildlife and Natural Parks, Botswana, for granting me the research permits necessary to do the work. A special thanks to Dr. Erik Verreynne who conducted the dartings and monitoring in an excellent and commendable manner. I would like to thank Stuart Quinn for allowing us to work on his concession, as this is where most of the lions were located. Another special thanks to EcoTraining and their staff and Mashatu rangers, who are always on top of matters when it comes to tracking lions and leopards in the Central area. Last but surely not least, I would like to thank the UGA team who helped me achieve my goal during this winter months’ field work. A big thank you to all!!