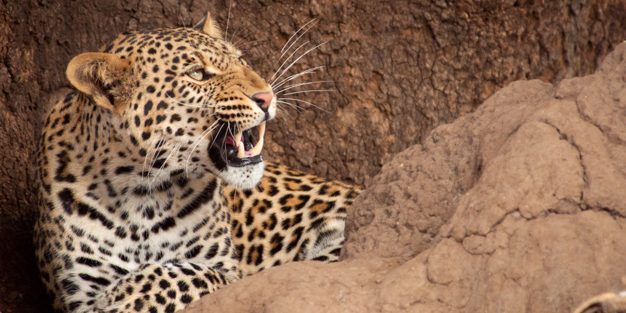 After such a great response to an image posted of the son of the Dead Croton Female, I decided that a more in depth report back on his progress would be in order.

As mentioned, at the end of August the leopard will be turning 2 years of age, along with his sister. The brother and sister have for the past few months been separated and are now exploring individual territories, both of which line the Majali River. The leopard’s sister and mother (Dead Croton Female) have been spotted together on numerous occasions, sharing meals and resting in the giant Apple Leaf trees within their territory. However, the son of the Dead Croton Female has been solitary since he moved away from his sister and mother and is doing tremendously well on his own. His physic has filled out over the past few months, which is a sign that he is a successful hunter.

Stretching after a long afternoon nap

Getting agitated with a very vocal tree squirrel close by

Distinguishing features on this leopard at present are a faint scar across the bridge of his nose and a pinkish colouring to the tip of his nose – a sign of adolescence, which may change in the next year.

The year ahead will be a challenging year for this leopard, as it reaches full adulthood around age 3. When this happens the leopard will be forced to establish its own territory which may result in him being pushed out of his current territory by the more senior and dominate males in the area. Only time will tell what changes are ahead for this young leopard, but for now guests at Mashatu are all enjoying viewing his relaxed nature and development into the beautiful specimen he is.

Guests of Mashatu viewing the son of the Dead Croton Female

The leopard showing its relaxed nature