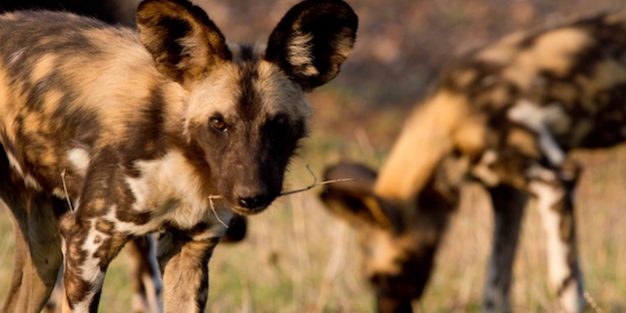 Thunderstorms were frequent all around the reserve during the month. But although a lot of rain fell, some places more than 60mm, it ended up being sparsely distributed across Mashatu. The landscape is actually looking dry and arid at the moment, and more in keeping with the onset of winter than the middle of summer. We’re not overly concerned however, as mother nature always manages to take take care of herself. The rains will come eventually, it’s just a matter of exercising a little patience. They arrived later than usual last year, so perhaps the same thing will happen again this year.

We recently had some wonderful news when we discovered up to three sets of tiny lion tracks together with two adult lionesses in the SW. One of the females we believed to be pregnant suddenly went ‘AWOL’. Lionesses typically give birth in very secluded areas, away from the rest of the pride and well hidden from most other animals (and researchers!). Although the female with the cubs had yet to be seen, the tracks in their area, combined with her recent ‘disappearance’, could well add up to three sets of tiny lion tracks. A new set of faces joins our SW pride!

With the Central pride moving further east into a neighbouring property for most of the month, some other lions were seen fairly frequently. Old Matswane, our large one-eyed male lion, made a couple of visits into the central region. He didn’t hang around for long though, as he is still spending most of his time with a ‘lady friend’ in the far northern region of the reserve. The two male brothers that reside mostly in the SW made their way into the central region on a regular basis. They once again displayed the amazing ability to travel long distances at night. They seem to be spending their time between the young single lionesses in the Central area and the SW females.

The Wild dogs are still around and seen frequently. There are now four pups left out of the original five, and the adults all appear to be in good shape. They spent the month moving mostly along the Matebole River up to Fika Futi, back down to the Majale River, and then down to Main Camp. Spending time with this species is extremely rewarding. Their hunting success rate is so high that watching them go to work is jaw-dropping to say the least.

Leopard viewing is as fantastic as always, with good sightings being had on an almost daily basis. Larger herds of elephants were seen during game drives, although this was mainly along the southern and central region. General game is plentiful. Large breeding herds of eland were seen fairly frequently, especially around Nels’ Windmill. Giraffe, standing out like telephone poles in the mopane scrubland, never seize to amaze guests with their graceful running and sheer beauty.

Warthogs are prolific at the moment, especially along the M2 close to the Limpopo River. There were piglets aplenty running around and playing with their siblings, blissfully unaware of the fact that almost every predator in the area would love to snack on one (or two) of them for dinner!

Birding is still excellent, and we saw a diverse range of species in spite of the fact that it’s been a bit dry for this time of year.