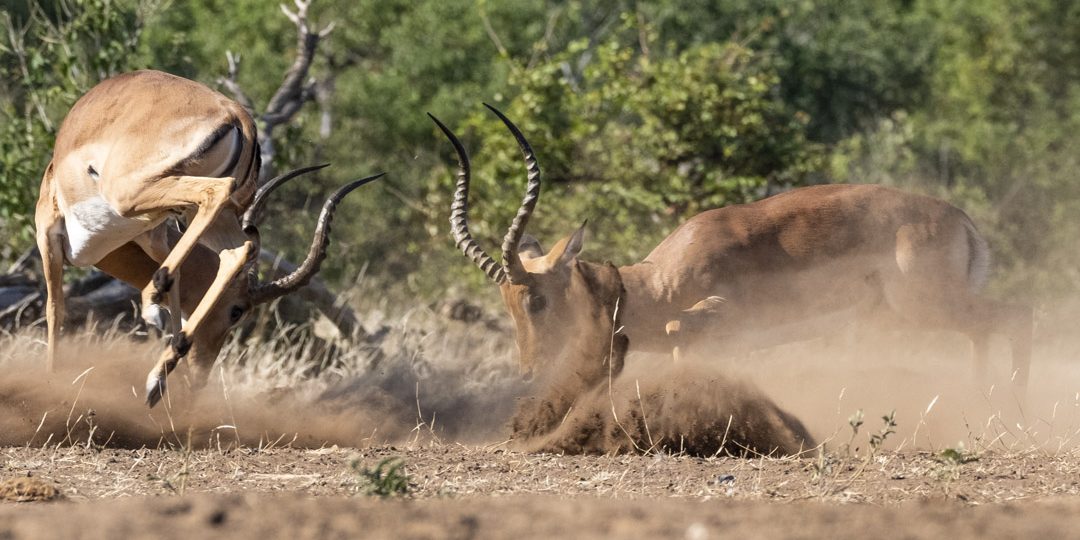 Impalas are by far the most numerous mammal species in the African bushveld. These graceful animals are superbly adapted to their environment, and it’s well worth spending some time with them while on safari. This time of the year (early winter) is probably the best time for observing impalas.

One of their most succesful tactics contributing to their large numbers is their breeding strategy. As winter approaches, shorter days trigger an increase in rams’ testosterone levels. This makes them more aggressive with each other as they begin to practice their fighting skills and set up their territories. This is the the rutting season.

Rams rush about chasing other ram intruders away while simultaneously herding females into their territories. Serious battles can be witnessed and the grunts, snarls and roaring sounds can be heard from miles away. These noises are often mistaken by first time safari goers as something far more menacing than a mere impala.

All this noise and action induces the females into oestrus which lasts for about a three week period during which all the females will be mated.

As a result all the impala lambs will arrive within a three week period late November, early January during the lush rainy season. This is also a good time to spend with impalas as the lambs are not only cute and adorable but they spend many hours hoaning their athletic skills by running and jumping in unison. Of course, with the arrival of the lambs, predator activity increases … so who knows you may even get to see more action than you expected.

Images and text by: Janet Kleyn