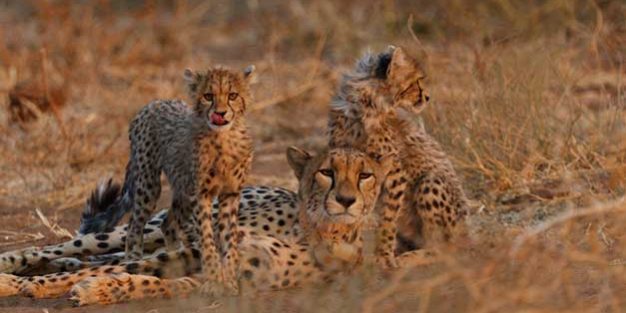 Young female leopard looks back at the elephants

The atmosphere has been clouded with dust for the last month and we waited in anticipation for the start of the rainy season. At last a thick blanket of clouds rolled in and with it came a cool chill. In less than 12 hours we experienced a 20°C drop in temperature. A cold front swooped in and brought back the cold winter breeze. A light drizzle fell – not enough to even register on the rain gauge – but it was all we needed to clear the dust out of the air. And the skies were blue once again as we resumed our wait for the rains…

A stallion stands back guarding his herd

Although we are approaching the end of the dry season, the general game is still looking very good. It is not uncommon to see large herds of eland and impala as well as smaller herds of kudu, zebra, wildebeest and giraffe. The smaller steenboks and warthogs are also a common sighting. Baboon troops can be seen in the large Mashatu trees, as the trees bear their berries at this time of the year. As the baboons sit in the tree picking the fruits, the impala and kudu wait below to pick up any bits that might fall or be discarded.

Leopard sightings were very good once again (seen on 83% of the days of the month), with the family of three seen most often. The cubs are about a year old and are spending more and more time on their own. Nonetheless, some of our guests had the privilege of seeing the family all together. What a sighting to see three big leopards rolling around, tackling each other.

A young female leopard is also regularly seen. On one particular game drive she was seen walking in search of a meal. We followed her at a distance hoping to witness a hunt. Unfortunately the large flocks of guinea fowls made it difficult to go unnoticed and they made sure that every animal within earshot was aware of the predator’s presence, with their consistent ‘kek-kek-kek-kek-kek’ alarm calls. The young leopard moved on to try her luck elsewhere.

Unfortunately she stumbled upon a breeding herd of elephants, and too late to retreat, she quickly dashed into a bush. Leopards are not a threat to elephants, but elephants do not appreciate their presence and will chase them if given the opportunity.  The herd was browsing and slowly made their way to the very bush she was hiding in. She lay there watching them as they browsed a mere 2 meters from her. They were not completely oblivious to her presence, as the mother elephants hurried their young calves to move on.

Looking back at the browsing elephant

There have been regular lion sightings, with the two male lions successfully hunting a young giraffe. The lions did not share the feast with the rest of the pride, but took it in turns to feed on the carcass, protecting it from the marauding vultures, jackals and hyenas that are always on the periphery ready for a quick grab of a free meal. Lions were seen on 70% of the days in September.

Cheetah sightings were lower during the month of September, possibly due to the high lion and hyena activity that has recently augmented in the central area. Nonetheless, three different groups of cheetahs were seen. The mother cheetah and cubs are still seen occasionally.

The spotted hyena den is always a favourite. Eight pups of different ages can often be found playing and investigating their new surroundings. As their teeth grow, they start gnawing on everything – be it a stick or the leg of a group member. The young sub-adults are always ready to engage in one of their games, even if it is to destroy the new toy.

Hyena pups playing around their den

Fun & games at the hyena den

Elephants are now broken up into smaller family herds. They can be seen feeding on the small acacias and mustard bush that grow on the floodplains in the central area. Elephants drink in large quantities on a daily basis, sometimes up to 200 litres in one drinking session. In the dry period fresh water is a limited resource, and most of the water-dependent species can be seen congregating in the dry river beds at the dwindling water supplies. Elephants, however, are a lot more picky about their water and won’t drink stagnant or brackish water. To reach fresh water they will dig holes into the soft river sand, excavating deep round holes to reach the fresh filtered water that seeps into the hole.  These seepage holes provide water for many other species reliant on H20.

Three honey badgers were seen on one afternoon game drive – in daylight!

An Oryx antelope was seen near the vlei. Oryx (also known as Gemsbok) used to occur in the area, but became extinct in the reserve in historical times.