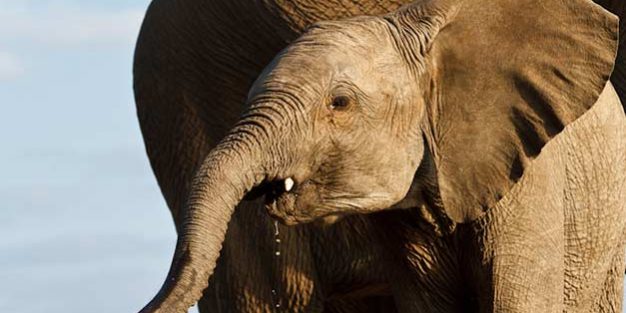 October has been a month filled with incredible sightings – leopard, lion, and cheetah kills were all recorded over this month, as well as a sighting of a rare brown hyena!

The dry bush is busy transforming into a small green paradise. Within literally a couple of days of receiving rain, a thin blanket of new grass and other ground covers are breaking through the dry baked surface of the soil. This is, in my opinion, the most beautiful time of the year at Mashatu. The Mopane trees are cloaked in green, their fresh leaves contrasting against the dark earth. The Baobabs that stand like dead giants fill their stubby branches with a crown of green. The air is fresh and the smell of rain is imminent. Giant cumulonimbus clouds roll across the sky, adding a sense of drama to the verdant landscape.

It is not only the plants that are growing as this is also the time of animal births. Large eland herds can already be seen, with their newly born calves in tow. A young mother was seen by herself in some thick bushes with a calf barely a few hours old. The new-born could hardly stay on its spindly legs as we slowly approached to have a closer look.

Cheetahs were recorded on 39% of the days over the month. This included two cheetah hunts and a number of kills. Unfortunately, we also recorded the death of a cheetah cub. The cause of death is unknown, but the cub had appeared to be very lethargic and emaciated in the days preceding its demise. This mother cheetah gave birth to four cubs, but a series of unfortunate events has left her with only one survivor. Cheetah cub mortality is extremely high in the first few months of life, and the last cub – at 6 months old – will hopefully survive to adulthood. On a brighter note, some of our guides believe that another female cheetah is pregnant.

Leopard sightings have been unbelievable, with sightings on 87% of the days. It is not uncommon to see four or five different leopards during a game drive. Interesting sightings included a young leopard hunting a young klipspringer. The kill quickly attracted hyenas to the scene, and before the young leopard had a chance to haul its kill up into a tree, a pack of hyenas was on it.

Another rare sighting was the sharing of a meal with a weaker individual. The family of three leopards was spotted with an impala kill. After a short while, rangers realised that another leopard was also present; an adult female that the guides did not recognise. Although there was a lot of snarling and growling, it appeared that the mother leopard accepted the intrusion of this stranger, and even allowed it to feed with them. Such unexplained behaviour can occur, despite it being rare.

The lion pride of 11 has been regularly sighted. The sub-adult males are already showing the first signs of developing manes, and they far outweigh their sisters.  Lions were sighted on 52% of the days in October.