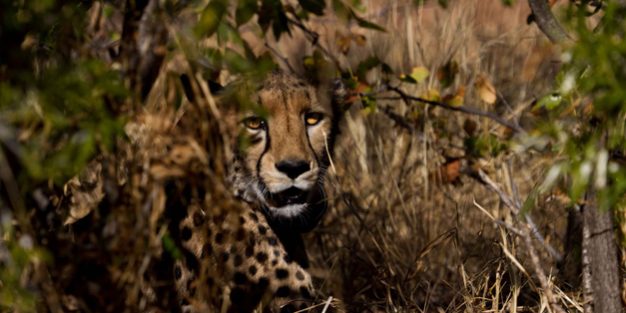 The month of May has experienced cooler weather and, although the grass has dried up in all habitats but that of the riverine areas, the trees and bushes are still looking green. No rainfall was recorded during this month and temperatures ranged between 8 and 31°C as we move into the cool dry season.

One of the three elusive males – Kaizer

Recent lion activity on Mashatu has allowed for some very interesting sightings. The old male lion, Matswane, has been in and out of the property and very much within the territory of the two Juma males. Fortunately the two lionesses and their nine cubs have managed to keep out of his reach. The Juma brothers have returned onto Mashatu, but as far as we know have not yet crossed path with Matswane, which could result in a confrontation. However, three young males have suddenly made an appearance. Their tracks have often been spotted, but they had never been seen due to their skittish nature. At last they were spotted by our guides; the three boys were seen chasing Matswane off a recent kill. Matswane didn’t put a fight against these three strong adversaries, and left his meal to them. Meanwhile the two lionesses with cubs have been busy – they appeared to have managed to bring down a young giraffe by themselves. This is a feast for the family as it will feed them for several days! We have also had a report of two lionesses denning in the south near the Limpopo River, with very small cubs. We do not know how many cubs there are yet, and whether both or one female is the mother. Another small pride of four lionesses has been sighted around the underground hide, and the two Juma brothers have been seen mating with one of them. Overall lions were sighted on 81% of the days in May!

Leopard sightings have been extremely good with a number of great sightings of adults and cubs. On recent predator drives, Pitsane, the large male that resides in the riverine vegetation of the three main rivers, has been successfully tracked. He appears to have made himself very comfortable in some very thick Croton thickets near the Limpopo. He was found feeding on an impala carcass that lay only a few metres from a previous impala kill. On another drive he was found moving onto the open plains after recently being chased off his kill by some young hyenas. Leopards were sighted on 71% of days in May.

Spotted hyena sightings have been very abundant. A clan has made a new den just east of Main camp, very close to one of the main roads. One of the females is lactating and we expect that there are very young pups in one of the dens. We can’t wait to see the pups emerge from the den, as they are always very inquisitive, which allows for some very close up photography!

Cheetah sightings were rare during this month (19%), possibly due to the high lion activity. Nonetheless we did have some very good sightings of the coalition of three males, and a sub-adult female also made an appearance in the central area. She is a young female that has recently left the comfort of her mother. She hadn’t been seen for almost two months, so it is great to see that she has adapted well to the solitary lifestyle. Her mother is currently denning west of Mashatu, and we wait in anticipation for the first sightings of these new cubs!

Elephant viewing is always good at this time of the year, with herds as big as 100 to 150 animals seen towards the beginning of the month. Smaller herds are often seen concentrating around the rivers where pools still remain. The trumpeting and low rumbles of these majestic mammals are often heard at Main camp in the evenings, which make for some lovely bush sounds while sitting around the camp fire. Elephants were sighted on 87% of days.

Francolins and guinea fowls are currently seen with their young chicks in tow, scuffling in the dust for seeds. The Saddle billed storks are still found along the Majali River in the remaining pools. A pair of Southern Ground hornbills have been seen and heard a few times in the open plains of the south central area. These are endangered birds that have declined rapidly due to loss of habitat, persecution and their very slow breeding (first breeding at the age of ten, and then only successfully raise one chick every nine years). Bird watching can be one of the most enjoyable activities, and even within the walls of Main Camp one can hear the calls of Meyer’s parrots, Arrowmarked Babblers, laughing doves, African fish eagles, Meves’s Starlings and Pearlspotted owlets just to name a few.