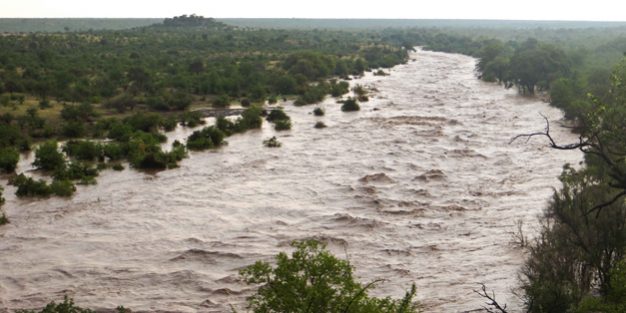 March had a few days of cool weather with temperatures below 20C, but most of the month was warm. On the first day of the month we received 17mm of rain, which brought down the Majali River, bursting it’s banks in some places. The Jwala River was also in flood. It is always spectacular to see the first flood of a river; we were waiting for the rain to subside while having our tea on the terrace when the small stream in front of the camp started to flow, within minutes the little stream turned into a powerful river, rising steadily as we looked on. The Limpopo River has steadily come down, and towards the end of the month the first few attempts to cross it with our vehicles were successful. 4×4 vehicles can now safely cross the river at the Pont drift border.

Leopard sightings have been plentiful, with up to four different individuals seen on the same day! Two leopard cubs have been a favourite of the month, and they are regularly seen having fun going up and down trees and chasing squirrels or birds in the high branches of Mashatu Trees.  Overall leopards were sighted on 80% of the days in March.

This month had great Lion sightings. The nine cubs with the two lionesses are often seen in the central area of the reserve. On a recent sighting, one of the lionesses was seen hunting a warthog. She single-handedly brought down the large male warthog, and was quickly joined by the rest of the family who shared the feast. The coalition of two male lions has been scarce. They have been sighted east of the reserve, and also seem to be spending a lot of their time in South Africa – the great Limpopo River hardly being an obstacle as they swim across it quite easily. Lions were sighted 77% of the days in March.

A coalition of three males has been sighted regularly along the east of the reserve, near McKenzie and Jackal’s Koppie. They have been observed resting and occasionally hunting. The collared female cheetah seems to have finally left her cubs to fend for themselves. The cubs are well over a year and and half old, and fully grown, so they should be more than capable to look after themselves. Cheetahs were seen 47% of the days.

Large herds of over 200 elephants are being seen along Elephant Valley and the Matabole River. Family herds with numerous young calves have joined together to form large family groups, which are spread over the valleys.

Aquatic birds are often seen along the Majali and Limpopo River and their tributaries, which have pools of water. The vlei is also a particular attraction to a multitude of birdlife. African jacanas, Herons, Hammerkops and Kingfishers are the most common. The Queleas and Wattled starlings are currently nesting in the branches of the Acacias. We hear quite an ‘orchestra’ of birdsong when driving through these congregations. The Southern Carmine and White fronted bee-eaters are also common; these birds are often seen on perches above the beautiful carpets of the devil thorn flowers, watching and waiting to catch the insects pollinating these flowers.