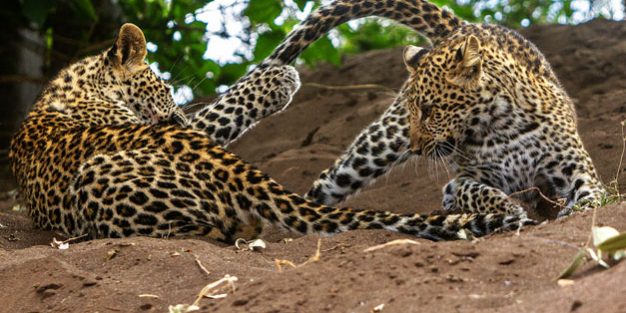 June experienced cool weather with a number of overcast days and a cool breeze, but no rainfall was recorded. Temperatures were as low as 5°C during the night, but the days warmed up with a maximum of 28°C.

Lion activity has been great, with lion sightings on 80% of the days in June! The lion pride with the nine cubs is regularly seen – these youngsters are growing fast! On one morning, our guides found the family all split up into three little groups over a wide area with some of the cubs left by themselves and in obvious distress, as they were trying to find their family. Fortunately the next day they were all seen together again. It’s likely that the family had suddenly been disturbed, and fled – scattering in different directions. We are unsure what caused them to flee, but possibly the appearance of other male lions. Two lionesses are denning in riverine vegetation near the Limpopo River, where three very young cubs have been seen. It is a huge privilege to witness very young cubs as they are so vulnerable in their first few months, and it is only due to their mother’s very relaxed nature that we were able to view them.

Matswane, the old lion, has been moving huge distances, and been seen moving into South Africa and Zimbabwe. He appears to be without a territory, as younger and stronger adversaries have pushed him out of his previous territories. His collar was removed during the month of June.

The Juma brothers were seen mating with two females towards the beginning of this month. The collared brother had his collar replaced as his previous collar had stopped working.

We have had some extremely good sightings of leopards. A new family was recently found; a young female and her two cubs. The cubs – a young male and female – are about two to three months old. The mother is young and a little skittish, and holds a territory around White Cliffs, which is just outside Main Camp. The first time they were seen feeding on an impala carcass, the mother – perhaps a little inexperienced – had dragged the kill under a bush. It didn’t take long for a spotted hyena to locate the kill, and it quickly chased off the leopards. The two cubs took refuge in two different Shepherd trees, and the mother quickly fled to safety. Another sighting of this family was just outside Main Camp‘s waterhole, a mere 200 metres from the Boma. They were found feeding on a bushbuck, luckily this time it was safely stashed up in a tree.

The other family of three with cubs of about 10 months old are regularly seen. The male is now significantly bigger than his sister, and they are often seen wrestling and stalking small prey. A particularly rare sighting was when the brother managed to catch a baby porcupine!

Pitsani, the large male leopard that holds his territory over the prime area over Mashatu, had his collar removed during this month.

Overall leopards were sighted on 77% of the days in June.

Overall cheetah sightings were low, and only seen on 13% of the days in June. A young female was seen a couple of time near the Majali in the central area. The three brothers were also seen, on one occasion they successfully hunted an impala.

The hyena den is very active! Three very young pups have recently emerged from the den and are making for fantastic viewing. The den is just off one of the main roads, and the hyenas are very relaxed, with up to eight adults sometimes seen lying around!

Elephants have been seen throughout Mashatu in small herds. At this time of the year they start congregating around the remaining pools in the Majali and other larger rivers. They are often seen passing through and drinking at the water hole in front of the terrace at Main Camp. Some of the pools in the Majali River are still large enough for a whole herd to enjoy a bath! Elephants enjoy cooling down with water, and will also cover themselves in mud to protect their skin from the sun and biting flies.

As the landscape dries up, the water birds congregate in the remaining pools. Saddlebill stalks, cormorants, Egyptian geese, three banded plovers and Hamerkops are commonly seen. The white fronted bee-eaters returning to their colonies in the late afternoon is a sight to see.