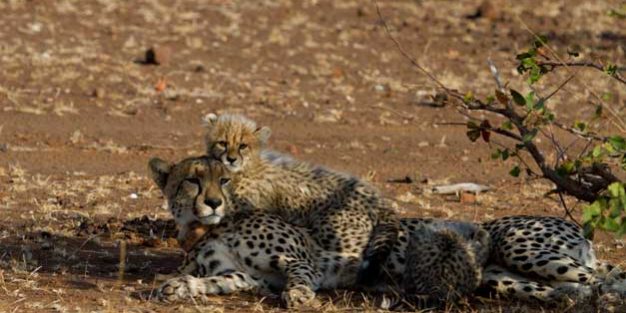 Tug of war between mother and son

August is typically known as the windy month at Mashatu, but it is also the height of the dry season. Most of the trees have shed their leaves, making the bush more open. This allows for easier spotting of game and the elusive cats. The last remaining ground cover has by now been almost completely removed by the grazers, and what remains is being picked up by the huge flocks of guineafowls. The sunsets in August are particularly spectacular as the dust picks up the deep red and orange colours.

The last remaining pools of water are drying up, and animals can be found converging at these rare sources of water. It is not uncommon to see impala, kudu, eland, baboons and Saddle-billed Storks all congregating around a small pool of water.

Temperatures are warming up with a maximum average of 28.2°C and a minimum average of 11.1°C. Although no rain was recorded, we did experience a number of overcast days.

Lion sightings for the month of August were as high as 84%. The pride of 11 was regularly sighted, sometimes with the two males. They killed an eland on the bank of the Majali River, feeding on the carcass for a few days, while hyenas and vultures lurked on the periphery waiting for their turn.

A number of our guests have had the privilege of witnessing four new born cubs. The lioness is denning on the banks of the Matabole River in the Croton riverine. This is not far from the underground hide, and possibly her closest source of water.

Sub adult lion cub from the bride of 11

Leopards were seen on 81% of days in August!  The two one-year-old cubs were most regularly sighted, both alone and with their mother. Their mother, a well-known old female, is getting on in years and can no longer haul large carcasses up trees. Leopards often cache sizeable kills in trees, keeping it away from other predators. Although the leopard is one of the 7 large African carnivores, it only outranks the cheetah. Lions and hyenas outweigh the leopard, and although wild dogs are smaller they have power in numbers.

Although the cubs have started hunting small prey by themselves, their mother continues to share her larger kills with them. On one memorable drive she had killed an impala, then went off to find her cubs. After much persuasion, they followed her back to the kill. They took turns feeding on the carcass for the next couple of days. On one afternoon we found the three of them under a tree, with the young male feeding on the carcass while his sister and mother laid in the shade. After a little while, his mother came up to feed but the young male was not happy to give up his meal just yet, and holding on to his part, a tug of war ensued. He let out a growl warning his mother to let go. But his mother leapt at him, all claws and teeth bared. The fight was quickly resolved, as the young male quickly backed away to safety as his mother’s years of experience well out ranked him.

Another confrontation was seen with these two cubs and their older sister from the previous litter. The two cubs had gone down for a drink at a pool in the Majali River when their older sister appeared. She immediately charged at them. The young male quickly ran away,  but his sister stood her ground. The two sisters fought, and the younger female quickly surrendered and raced up a tree for safety.

Mother leopard fights her son for her kill

Cheetah sightings were very good during the month of August, with cheetahs seen on 35% of the days. The coalition of three  brothers was seen towards the beginning of the month, as well as a young female by herself. However, Mapula and her cubs were the favourite of the month and were seen most frequently.

Some of our guests were lucky to witness the family on an impala kill. This is the first time we have seen the cubs feeding on meat.

Cheetahs are particularly vulnerable to having their kills stolen by larger predators. In order to avoid this happening, they will drag the carcass under a tree or bush to avoid being seen. Despite this, a few vultures spotted the kill and were hoping to have their share. Vultures attract other predators, and the mother cheetah knew of the risks. She gave chase on the unsuspected vultures, leaping into the air like only cats can.

Unfortunately she has lost another cub, leaving her with only two. Our guides suspect it happened while she had left the cubs by themselves to go hunting. She managed to kill an impala, but only one cub responded to her calls. She went in search of the other two, but returned with only one.

The hyena dens are still active, with the young pup emerging during the cooler times of the days. Hyenas are opportunistic carnivores, both scavenging when possible and preying on vulnerable prey. Although quite capable of capturing healthy prey by themselves, this is only done as a last resort.

An adult giraffe died near Main Camp provided ample of food for hyenas, and their calls could be heard throughout the night.

Hyena returns to her den

Elephant viewing is best at this time of the year as herds congregate around the remaining pools of waters. With summer around the corner, the days are warming up and this encourages herds to cool down by taking mud baths. Elephants were seen throughout the month, with some herds as large as 150 – 200 individuals seen feeding along the Majali River.

Mashatu boasts a number of bird species, with over 400 recorded. Helmeted guineafowls can be seen in large flocks around the alluvial plains of the major rivers, red-billed Queleas can also be seen flying en mass from one tree to the next. The water birds congregate around the remaining pools, and Saddlebilled Stocks can often be found fishing alongside them. A pair of Fish eagles can often be seen and heard calling around Main Camp.

Guineafowls at a water pool in the Majali

An adult baboon was killed by a crocodile that resides in a large pool in the Majali River. The distressed baboon was trying to swim to shore when the crocodile gripped him and pulled him underwater.

Two pelicans were seen flying over the reserve, an unusual sighting for a landlocked country!