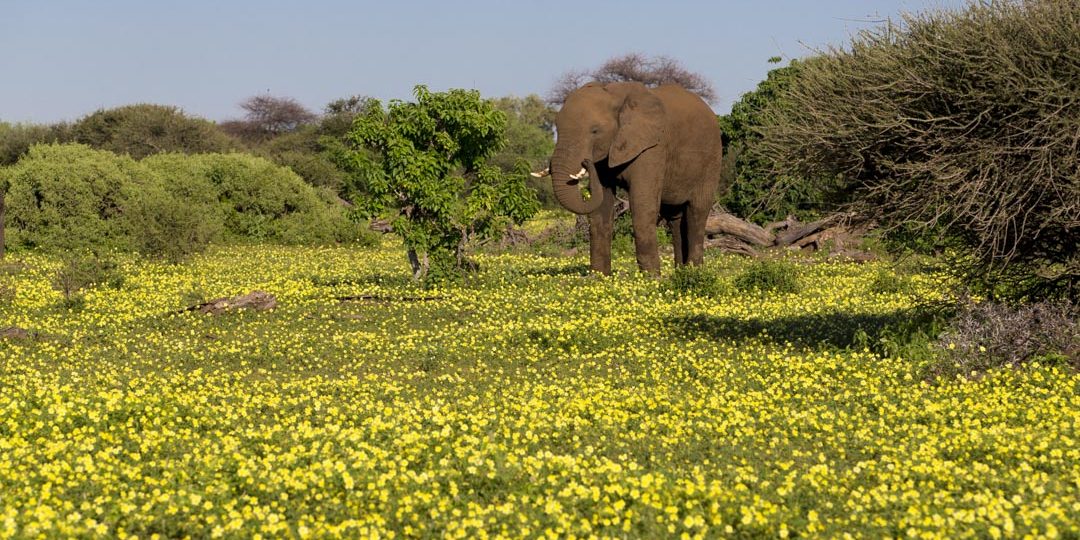 Summer in Mashatu brings the rains and with that an incredible transformation to the landscape. Within days, the open plains that are dust bowls through the winter months evolve into fields of yellow. It’s a spectacular sight for those lucky enough to be visiting over this period.

This carpet of yellow flowers is commonly known as Devil Thorn, so named because of the hard spikes of the fruit, which are sharp and hard enough to cause punctures on bicycle tires and injury to bare feet. There are instances where the thorns of this plant have been used as a murder weapon by smearing the plant in a poisonous substance and putting it in the path of the victim.

The Latin name is Tribulus (clathrop – an iron ball with spikes) Terrestris (on the ground). The fruit is a hard nutlet with two to four spikes resembling a clathrop. The spines of the nutlets point upward, where they stick into feet and fur of animals, and are thereby dispersed.

Devil-thorn is native to warm temperate regions and can thrive in arid conditions and poor soil. It has a network of fine rootlets that rise out of a taproot to take advantage of soil moisture.

Many animals can be seen browsing these plants including impala, kudu, baboon and elephant. If browsed while the plant is wilting it can cause photosensitivity.

Traditionally the plant is used to cure throat and eye diseases, gonorrhea and as a diuretic.   More recently, some body builders use it as as a dietary supplement with the belief that it increases testosterone levels, however tests have found no evidence of this being true. It is also used for libido enhancement and as a diuretic.

Mashatu after the rains is a yellow wonderland, just another thing that makes this place so special.