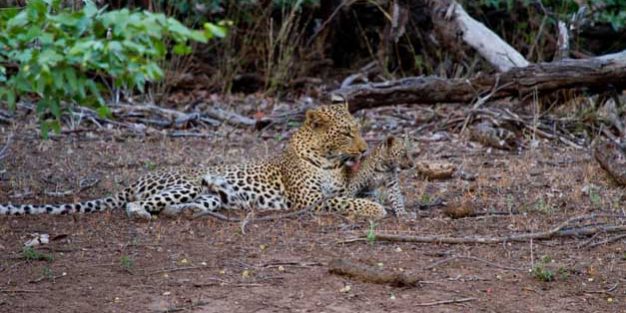 Although light showers have been experienced in the area, the general feel and condition of the bush is harsh and dry. A recent thunderstorm just outside the reserve borders caused most of the smaller drainage lines and tributaries to flow, causing the Matebole River to nearly burst its banks. When looking at the bushveld it’s hard to believe that we find ourselves in summer. Compared to last year, this February looks very dry and we hope that the rains will still come. Temperatures are generally cooler than last month, with averages ranging between 21 – 33°C.

Predator sightings tend to increase when conditions are dry and the bush is open – conditions more typical of the winter months. This is no different for February, with leopard and lion sightings success rates of 93% and 82% respectively. Cheetah sightings have increased from 48% to 61%. Most astonishing, a group of 9 cheetah were seen early in February! The composition of the group consisted of the famous female with her five cubs, but they were semi-harassed by the notorious Coalition of three brothers – making a stunning scene of nine cheetah all together.

Inter and intra-competition amongst African terrestrial carnivores is commonly seen and, although these interactions can be quite exciting, sometimes the aftermath & consequences of the ‘loser’ can be hard to accept. A female cheetah with a nasty gash over her back was seen in the SW section of Mashatu. Lions are known to frequently kill and injure cheetah if the opportunity arises, but luckily this female managed to escape with her life. Cheetah have massive home ranges, similar to Wild Dogs, and one of the reasons for that is that cheetahs need to avoid areas where larger predators – like lions and even spotted hyenas – roam,  but at the same time those are the areas where the highest prey densities are typically found. So by avoiding those ‘hotspots’ they are forced to hunt in areas with a relativy lower prey density.

One thing that I love about the African bush is that you never know what you’ll find around the next corner. Sometimes you get lucky and you get to experience a glimpse of one of the best kept secrets of the bush – a female leopard with a tiny cub. One afternoon on my way back to camp, I was fortunate enough to experience this. Driving along the Matebole River I noticed a leopard lying on the opposite bank. When I stopped I saw a small greyish bundle of fur disappearing into a thicket. Not long afterwards I saw a very young baby leopard emerging from her den. As the mother was fairly relaxed, the cub quickly grew confident and approached her mother – not too bothered by my presence. Leopard sightings are always special and magnificent to watch, but sightings like these are far and few between. A truly amazing experience.

To top it all off, a new lioness with three cubs was seen also in the SW section of the reserve. The origin of this lioness is still unknown and the cubs are believed to be sired by the new coalition that roams in the same area. The cubs are estimated to be 3 months old and all three are males. A baited calling station was setup to attract these lions so I can get proper ID shots of all of them. Not long after we started the calling station (broadcasting sounds of an animal in distress), a Brown hyaena made her appearance! She was very relaxed and gave us ample opportunity to take pictures of her and observe her chasing the ever present Black Back Jackal around – all until the lioness arrived…

Most elephant sightings are along the major rivers where adequate food resources can be found. Although sightings have increased from January, these large animals are still wide spread throughout the landscape.

General game sightings of zebra, wildebeest and giraffe are still abundant. Kudu and waterbuck are also found closer to water sources and riverbeds, and large herds of eland are seen randomly across the area.