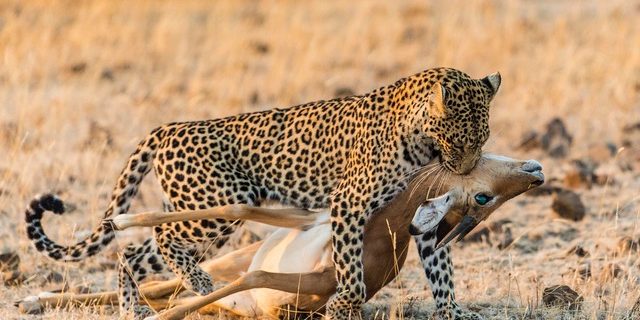 Some days things just turn out differently to what was planned.  This was definitely the case recently when myself and some guests were travelling to the Photo Mashatu underground hide.

En-route to the hide we had a brief sighting of a cheetah running after something.  We quickly got closer and saw that the cheetah was chasing a civet.  The cheetah gave up quickly on the civet and went to lie down.

Just as we were leaving to continue to the hide we noticed her perk up and look out into the distance.  Some impala were approaching so we decided to stay a while longer. After a while she started heading towards the impala and before long she had made a kill.

We arrived at the scene just as she was sitting by her kill catching her breath.  After sitting with her a few minutes, she again looked out into the distance intently.   Following her gaze we saw a female leopard approaching fast.

As she got closer all the cheetah could manage was a quick growl before being forced to run off and surrender her kill to the more powerful of the two. All this while a few meters away a pair of black-back jackals called out excitedly ready to steal whatever they could, but they stood no chance against the powerful leopard.

The leopard proceeded to pick up and drag the fresh carcass a distance of about 30 meters up a steep hill and stashed it under a thick bush, where she would be able to feast most of the day uninterrupted.

It was an exhilarant morning and finally time to continue to the hide. But the bush had one more surprise in store for us.  Close to the hide we bumped into a beautiful big male leopard.   We spent a short while with him before getting to the hide, and we made it just in time as minutes after arriving the elephants arrived.

The bush is always an incredible place but some days are just exceptional.  As the old adage goes, always expect the unexpected.