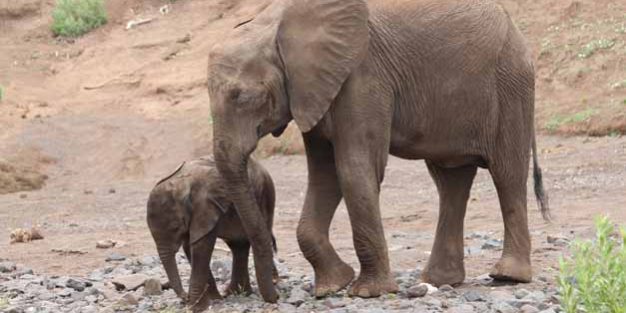 There has certainly been a lot of change for the elephants over the first few weeks of the New Year. A gap was shut between early rains in December and minimal rain coming into 2013. Our rain fall total for 2013 is nearly three times that of 2012 as a result of some serious and extensive flooding. That topic will be covered in the next installment of our month in review. For now, the focus remains on the elephants as they approached the big rain event which brought 220 – 300mm of rain in different parts of the reserve.

Coming into January we saw elephants throughout the reserve with consistency, and while their foraging groups remained small – usually just immediate family – they travelled in larger collections of families, spaced far apart from one another. These bond groups have the advantage of mass unity, without reducing forage opportunity in places which until recently held minimal new growth. Several species of plants that are enjoyed by the elephants have produced new shoots in response to warmer weather, sunlight and the occasional sprinkling of light rain. Umbrella thorn, Purple pod Terminalia, and Red Bush willow have all shown new shoots and leaves in early January.

The continued presence of water pans and emergence of ground cover have eased previous stresses for elephants moving from one place to another. Although travel between areas is fast paced, it now includes time for browsing, grazing, drinking and even playing along the way. Here a young adult moves quickly along the Croton edge. A younger elephant traveling along side in the background gives the impression of a turbine of feet propelling her through the bush.

Even with increased food and water the heat of the day still brings its challenges and most elephants take a reprieve to get some rest as they linger in cool shady places.  This bull was found nestled deep in the recesses of an old Umbrella thorn where he used thick limbs to support his large being.  The calf in the next photo, made use of a small Croton, diving head first into its foliage before settling down and the base.  As he rests his older sibling and mother take advantage of the yellow flowering Devil’s Thorn emerging in patches across the reserve.