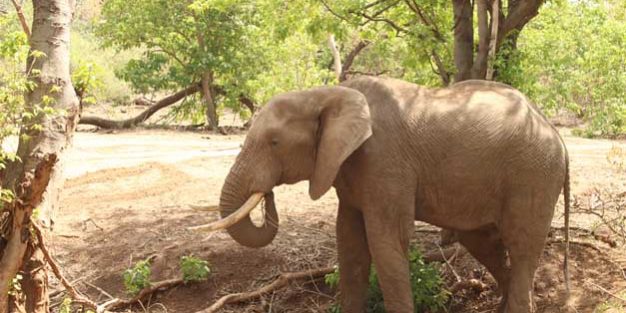 November’s elephant activity has shown a combination of behaviours seen over the last few months. Some herds continue to travel in smaller family groups while others have merged their bond groups to form large herds. Large and small groups may remain localized to one area while others traverse the extent of the reserve. The reason for this variability is tied to rainfall. The rains continue to be inconsistent with pulses of showers initiating growth of grass and leaves in pulses as well. Consequently elephant movements have responded to availability of forage with similar movement pulses.

Despite varied rainfall, elephants continue to be seen with increasing numbers throughout the reserve. The young of the year are generally more energetic.  With more water holes available across the landscape these youngsters get more frequent breaks for hydration and socialization both important to their development and the success of the herd. Many more bulls are present in the reserve now as well. Bulls move in closer proximity to the herds as summer season progresses and resources provide more energy for courtship and mating.  These behaviors are also linked to rainfall shown by their inclusion in herd activities.

During periods of rain bulls can be seen travelling with herds, often in the rear or other strategic position, where they carry a competitive edge over outside bulls that may try to gain entry to the herd. They travel alone or in small bachelor herds typical of younger adult bulls that have more recently separated from herds. A similar scenario is played out at waterholes where bulls often arrive separately, drinking and browsing in stages and following the herd movement.

Waterholes provide a great opportunity for socialising between herds and family groups that may not otherwise come in contact. Because water resources are of such critical importance, there is a greater tolerance for overlap of elephants from different social classes. However most herds rather arrive and depart within their groups, maintaining clear hierarchies between them. Bulls may remain at a waterhole and spend time in the vicinity of more than one herd passing through, yet they are often in the periphery until there is an acceptable amount of space for them to enter the scene.

The peak temperatures of summer are also playing a roll in habitat selection. One of the larger herds recently spent about ten days in the vicinity of Mashatu Main Camp visiting the waterhole at camp. Small portions of the whole herd moved through in stages to ensure enough time for all to enjoy this vital resource. Here the calves and juveniles were seen with good energy, playing with siblings in games of dominance, splashing about and rolling in mud. Then with another pulse of rain, the herd moved on to forage in new territory.

Another group of about 25 enjoy spending their midday hours beneath the shade of giant Mashatu trees; one of the few trees capable of providing cover for such a large group. Mothers stand over young calves who wrestle with bodies. Unable to sleep they alternate between lying down and standing, nursing and back down again. Older juvenile boys stand on the outskirts, giving space to the family as the forage, periodically returning for moments of cool salvation. While watching this herd one day, I was greeted with the return of a very large bull. His size was captivating, dwarfing me in my Toyota Land Cruiser. He calmly put his trunk into the air to assess my presence and continued on toward his herd. He was calm and certain with each of his steps, as passed within metres of me. This is certainly one bull that has been around for a long time. A magnificent power, encased in ease and tranquility. He must remember some amazing seasonal experiences over several decades.

Enjoy the month of December, when you’ll hear some of the last stories for 2012 and prepare for a great new year. Until then, here are a few extra photos of new sightings for the season. Butterflies and the full moon from November to December, enjoy.