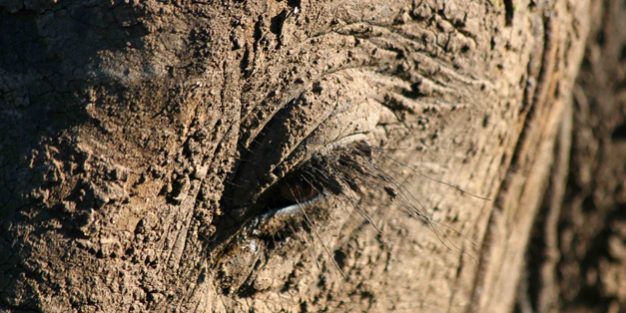 Elephant up close by Andrei Snyman

The month of May saw no rain, so the behavior of elephants and other wildlife began to change to cope with limitations of water and food resources. One of the key elements to elephant research includes monitoring the movement of the herd through the use of radio telemetry collars. As the landscape continues to dry out throughout the winter months, and replenishes during the wet summer season, collared elephants shed light on the survival strategies they use. Those of you who have travelled to Mashatu may have had the pleasure of observing one of our collared females, “Agatha”. This is one of her stories.

Elephants in a row by Andrei Snyman

Early one morning on a game drive, we were able to view an interaction between Agatha, her small family group and a particularly brave hyena. As we emerged from dense Croton forest of the riparian area, the light of early morning shone through dust across the open savannah beyond. The form of several elephants began to take form through the crimson haze and with it their agitation. A lone hyena came into view as he strategically tip-toed around their perimeter, keeping a wary eye to the commanding presence of the matriarch. Agatha turned her body to face the hyena, and as if by some subtle directive, the progressively younger elephants jumped in line. Agatha’s companion, Agnes and her juvenile daughter stood behind the protective elephant barrier, where they in turn guarded a still younger calf.

With everyone in place Agatha moved on the hyena bringing the defensive line with her. The hyena quickly paced around Agatha initiating a move toward Agnes and her two young. The line of defense immediately reformed. Agatha shook her head, swung her truck. Her massive body moved rapidly with a swagger of confidence, power and surprising precision. Agatha now kept the hyena to the outskirts. With the second approach the group had reformed with Agnes, encircling the youngest calf. Realising it had clearly taken on a much larger challenge than was worthwhile, the hyena moved to a further distance.

The tension subsided as Agatha maintained her post watching the hyena’s image merge with the distant horizon. The warming colours of morning returned to the scene. A young bull regained some space beneath a tree where he rested cross-legged, and the calf began to nurse.

After several enjoyable outings with the elephant herds, it has become apparent that the drying landscape that began in May is already influencing relationships between many species. We look forward to the next few months as the drying continues, and we learn more about how animals cope in effort to gain food and rear their young.