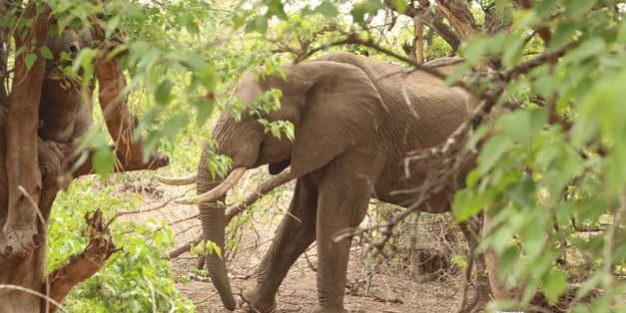 Elephants in the open in the late afternoon light – Jena Casey

Life at Mashatu continues to be filled with unexpected treasures and beautiful encounters.  The start of December brought relatively heavy rainfall to most of the Tuli area ranging between 10–55mm, which has allowed the browsers, mixed feeders and grazers in particular to recover well from the previous dry conditions. Green grass is growing in large open spaces just south of Main Camp where many zebra, wildebeest and other herbivores are enjoying the reprieve. Elephants are likewise active in these grass covered expanses and have also made good use of the many pools that formed throughout the reserve. Group sizes continue to vary from between 20 and occasionally up to 100 in large areas.  However the larger herds are far more seldom seen because dry conditions continue to prevail. Forage availability has improved over the course of spring and now just after the summer solstice where there is not much grass there are good quantities of leaves on trees.

A herd drinks from pools along the Majale River – Jena Casey

A youngster drinks from the river pool, while a mother helps her calf up the hill in the background

Working to collect behavioral data in dense foliage conditions presents new challenges related to the visibility of animals. Despite their size elephants move through the bush in silence and are usually heard because of foraging behavior rather than movement from place to place. Those elephants who travel alone and forage in one place for a long duration, such as independent bulls, are then harder to detect when driving through dense “leaf-on” conditions. One afternoon, while searching for elephants, I discovered an adult bull foraging alone. As I slowly came around the bend I saw him standing about 20 metres away, collecting thin little branches from the ground. He was momentarily interrupted from his focused foraging for little twigs and stopped to assess my intention. Facing me he opened his ears to demonstrate his size gave me a long steady looking over. Then apparently satisfied with my calm demeanor he returned to his task. I saw that he was comfortable and approached closer to gain better visibility of his behavior.

The little twigs from the bush turned out to be small parts of a massive branch of a croton tree.  There were three of these large branches each from different trees where the forked branching of the tree had been separated like a wish-bone. The technique of bringing food down from heights offers a benefit not only to these bulls, but also to smaller elephants and other herbivores that would not otherwise be able to access the food. It is particularly useful during prolonged dry conditions such as this year has presented. And although the trees in this case are reduced in width, with only one main branch the tree will also have less material to support during the dry conditions.

I watched the bull for some time until he seemed to have satisfied his craving for twigs and began to move in search of a new food source. He walked up from the drainage toward me, first along the dirt road then to the side where he paused to again consider my presence.  He stood beside my vehicle less than 10 metres away with his trunk sniffing the air and ears again outstretched. I could see his independence despite his younger adult status (between 20-25 years old). Then relaxing, his eyes softened and he turned and walked past me to another far off bush. It’s a beautiful experience to be so close to such a power animal and feel his attention on you relax. True perfection in time.

It was after this that the rains fell. Perhaps now this male, and others like him, will join the large numbers of elephant families in the marsh where they can source softer grasses, rather than relying so heavily on branches and bark.

December, and the year 2012, is coming to a close in the next few days. There has not been rain since that early event, but the grasses and wildlife are persisting. As we all look forward to the new year, I can’t help but wonder how the ecosystem will change in the months to come, and how the elephants will respond to those changes in their movements, and social and inter-species behavior.

Wishing you all a safe a peaceful holiday season, Happy New Year from Mashatu.