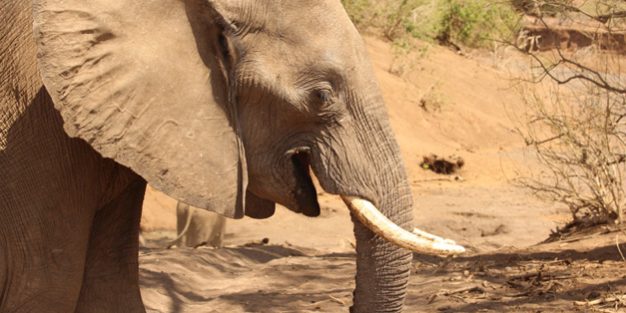 Henry leads the herd towards the water

This month has been a busy one, with guests visiting elephant herds during our specialised research game drive, The Ivory Drive, and with much time in the field with the research project itself. Guests have seen some lovely interactions between young elephants collecting foods dropped by their mothers, watching as they learn how to use their trunks, and generally seeing them become familiar with life as a Tuli elephant. With the bit of rain mentioned last time, and a few days with moisture in the air, elephant herds seem to be reforming into somewhat larger groups. Our last Ivory Drive participants were able to observe a herd of nearly 50 elephants browsing in the Mopane. What they choose to eat, how many there are and where they go to get it, are of particular importance to the research project as well.

The current focus of research is examining elephant survivorship through this year’s particularly dry season. Time in the bush is spent looking at social interactions of elephants within the herd, and the overlap of plant foods chosen by other browsers and elephants of different ages (and heights). While observing kudu foraging near a water hole, a familiar friend come trotting down a path on the river bank.  Henry seemed quite eager to have arrived at this regular drinking spot. He was followed by another slightly younger bull, and beyond them the remainder of his herd, a group of about 40, and a second larger herd of around 50 just behind them. Once refreshed, and with the pressure of senior female elephants moving in to drink, Henry made his way to the place where the kudu had been foraging just minutes before.

A close-up of Henry

Henry has a unique claim to fame among the elephants of the Northern Tuli Game Reserve. His mother, Hestella, lived to be over 60 years old. She was a strong matriarch, and grew to be one of the most docile and approachable among those in the region. Well known, and appreciated by game rangers and guests alike, she led her herd and guided the young to also become comfortable with visiting observers and onsite researchers. In her mid 50’s she surprised everyone when she gave birth to healthy baby boy. This is Henry. Now, with less than a year since his mother’s passing, Henry is approaching his 11th birthday and beginning to create some distance between him and his herd, although this day saw him in a leadership position.

Henry’s comfort and willingness to be around vehicles from an early age allowed me the opportunity to observe him from a very close vantage point, often less than 10 metres. He seemed almost excited to know that I was there watching him as he sniffed the sand for pieces of fruit and leaves dropped by the monkeys overhead. He walked closer still, pausing to see me as I looked back, before he slowly turned up the slope and into the Croton searching for more browse.

The young male who arrived with him, then rose up the hill from the watering hole and followed a similar path. Stepping over Henry’s tracks, he searched the ground for food, browse in the brush and paused to have a sampling of bark before he also moved out of sight in search of more food. It seems that Henry is following in his mother’s footsteps by showing young elephants the way, and building acceptance of those of us who are fortunate enough to spend some time in their presence, here in the Land of Giants.

Join us next time as we will move into mid spring.