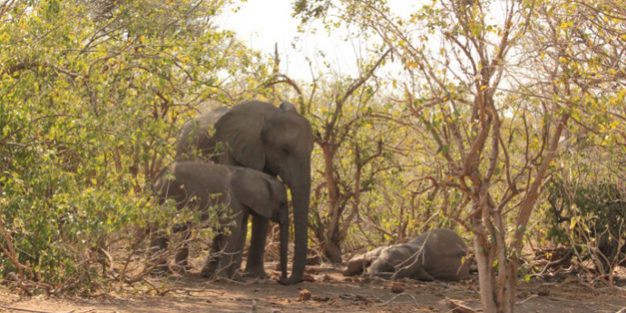 An elephant cow and her two sons

As we move towards the end of August, days are getting warmer and the landscape form has altered to a new level. Forage is increasingly limited for the browser community. The “browse line” can easily be identified in certain communities of Mopane, Umbrella thorn and more often Mustard, where stems and trunks of shrubs appear as skeleton forms in the under-story, opening a distant line of sight from the first meter above ground. These seasonal changes, marked by drought conditions, have already brought about a shift observed in herbivore behavior.

In recent months, family groups were observed sleeping in mid – late morning. In the last few weeks, however, these times of rest have occurred near midday when activity outputs would take a greater toll on their energy reserves. Through the colder months elephants are less affected by the heat, but as the temperatures increase, their energy output, and movements in particular, adjust accordingly. One such group was found during an observation of elephant foraging in the area of Large fever berry trees. The majority of the group had set out to travel to a new location when I came upon this scene.

A mother and two sons were dozing in the shade of a large Apple leaf tree, as their bigger sister slept within the foliage of a nearby Large fever berry tree. The youngest (seen standing in the picture on top of this page) originally lay beneath the bush to his right. His older brother, who had been browsing around momma, then came to stand at her side.  Soon he too was drawn to lie down, where he remained as temperatures climbed. The scene persisted in this way from 11:50 to 12:20, when the youngest awoke look to momma for comfort and nursing. Then, as the rest of the young awoke, the mother began to prepare for travel. She had a quick dust bath, providing a layer of sun-block, before they set-out to meet up with other members of their bond group who had left the area during their nap.

Elephants have the great fortune of being able to reach heights not accessible to most herbivores. As they browse they collect many different parts of the plants that provide nutrition, like leaves, tips of branches, twigs, bark and roots. They will even break large branches and carefully deconstruct them into smaller, bite-sized pieces or leave them hanging low for others to browse upon. Impala will often stand beneath bushes to quickly eat dropped food bits while elephant browse overhead. Young elephants browsing with older siblings and mothers, as well as eland, kudu, impala, and other herbivores forage in the vicinity of large elephants, and can be seen to collect pieces of food made more accessible by the elephants’ foraging behaviors.

We look forward to the next month when drying winds should be replaced by consistently warmer days.

Until then, be well and have fun.