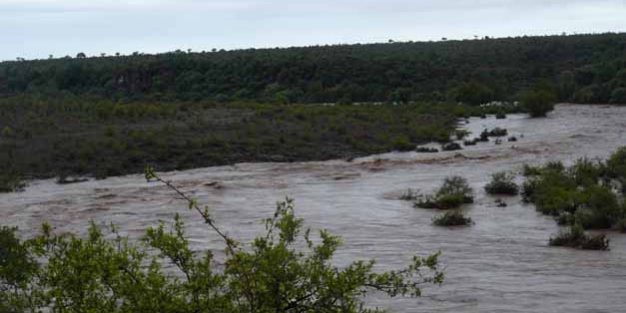 New Year’s Eve brought great hopes for rainfall in the Northern Tuli Game Reserve, when several millimeters were received at the stroke of midnight. Average rainfall for the greater reserve is estimated to be around 400mm, but last year produced only 100.5mm for Main Camp. Moving into January, hopes were rising that 2013 would bring more rainfall for the land and wildlife. Despite dry conditions through the first two weeks of the month, a positive outlook persisted and on the 14th, we graciously welcomed 1mm. The next day brought our first real rain event, which continued through the 16th, with a total yield of 80mm. Local residents, guests and wildlife alike enjoyed the new growth emerging from the moistened landscape. Sprouts of grass and colourful flowers appeared in even the driest habitat regions, including basalt hills laden with cobble, where bright yellow flowers of Devils Thorn began to bloom. Well on our way to surpassing the previous year’s rainfall total, we were encouraged to hear of another system due to arrive in a few days.

The rain arrived on Saturday the 18th, slowly at first. Warnings were issued to countries throughout the Limpopo belt, from Mozambique through South Africa, Zimbabwe and Botswana. Some phone carriers even sent cautions to their customers to prepare for the coming storm, as it was anticipated to have the potential to flood. The weather forecasters were right. In Main Camp we enjoyed light rain throughout the day on the 18th, but in other parts of the reserve, roads were already posing a challenge for driving as mud began to build, and stream crossings were becoming impossible. During the evening the storm really began to let go. Saturday night brought the total rainfall for Main Camp to 80mm, whereas the total received near the Pont Drift border was closer to 150mm.

An aerial photo of the flooding

The morning light showed just how much water had fallen upstream and in fact in many areas the streams were no longer in their channels.  The Majale River running from the northwest of the reserve to the southeast joins the Limpopo shortly after passing the Pont Drift border.  It course lies near Main Camp though usually at the waters edge.  Sunday morning there was a rushing river in front of Main Camp Terrace, feeding into the Majale, which seen to build waves of water several meters high.  Rains continued into the afternoon as the Majale became a force with surging waves that had expanded to roughly three times its width and pushed the tributary at the terrace up stream. The view from the terrace of the small water hole, had now become a moving expanse of water where the tributary and portions of the Majale met before moving away across open land back to the careening surge beyond.  For the most part that was the extent of excitement experienced in Main Camp.  Later in the afternoon rains had eased and it looked as if forecasts for a continued down pours through the night and into the next day may be over estimated.

Pont Drift from the air

Meanwhile at the Pont Drift border things were a different scene all together. Rains from Saturday had saturated the ground, claiming vehicles which could not be towed from deepening mud. The rains continued through the night but the results were quite different.  The border at Pont Drift lies along the Limpopo river which is fed by several other rivers and streams all joining in close proximity. Storm waters accumulated through the course of the event were transported from the south (in South Africa) along the Limpopo, from the west of Botswana along the Motloutsi and from the north along the Shashi, bounding Botswana and Zimbabwe. As rainfall totals were greater in surrounding areas the accumulation proved too great for the river channel to contain.

Nel’s Vlei from the air

By mid day ~ 300mm of rain had caused local lodges and residents to seek shelter on higher ground.  Evacuations were well on their way by the afternoon.  Several vehicles and people were rescued by way of tractor, but many vehicles remained stuck deep in the mud or were washed away as the Great Limpopo expanded its banks and rose across the flat planes near the border. Many visitors and locals turned to the nearby Limpopo Valley Airport to wait-out the storm.  Flooded roads were near impossible to navigate with water raised to the floor boards and still rising.

Radio communications remained functional to inform others when roads became too dangerous.  As evening approached the rains began to diminish, while flood waters continued to rise.  Those who were among the last to evacuate made their way to the airport in growing darkness.  They described powerful surges of water and rising steadily above the vehicle headlights.  With most familiar landmarks submerged, the risk of becoming disoriented or stuck grew as night fell.  The new focus became safety through the night.  Most guests and residents stayed at the airport, while others chose to set up camp on high areas of ground comforted by fire light through the night.

Nel’s Vlei and the Limpopo River

Personally I believe the unity between neighbors is one of the greatest gifts during natural disasters. Fast thinking, willingness and ingenuity prevented the loss of human life in very intense and hazardous circumstances. As morning rose, stories began to emerge of the devastation that was wrought. The great Limpopo had reached high and wide, taking with it many things that lay in its path. As the river edge had expanded to such an extent, many vehicles at the border crossing were lifted away. The river moved through homes, lodges and camps taking tents, clothing and random appliances. In the morning light there was a strange scene of refrigerators deposited randomly along the river bank. And as reported in the news, a crocodile farm was forced to release half their animals. Estimates are that more than one thousand crocodiles are now disbursed along the Limpopo, Motloutsi and other nearby rivers and streams, bringing worry to communities.

The significant change brought about in less than three days is a strong reminder of the power of nature. Many dilemmas will have to be solved in neighboring communities and farms that have been impacted by the wide spread loss of livestock and produce. Yet no brighter day has yet been had this year as when all the grass, flowers and birds again returned to Mashatu. Today the land is filled with yellow, purple, pink, indigo and white flowers. Ground cover has emerged within riparian areas around streams supporting the new shapes and pathways cleared by the surge. The open plains are abuzz with activity where the grazers, browsers, jackal and lion linger in patches of shade.

Mashatu after the floods

The remainder of January brought an increase number of impala calves, yet far fewer than previous years and certainly quite a bit late. The first calf seen near Main Camp was reported near the 25th, while those near the Pont Drift boarder were seen earlier in the month. Zebra and wildebeest young are also now more visible particularly in lower areas with fresh grasses. A pair of Ground Hornbills was seen at the river edge before and after the flood. Sightings of these endangered species are quite a nice treat.  Carnivore sightings included 17 spotted hyena, and 23 leopards, two of which were cubs. The rarest sightings were of a female cheetah, her three cubs and three other adult males, each seen only once. Most proliferate sightings were certainly of lions this month. Two sisters raising three litters of young, totaling 11 cubs were seen most often with 185 lion sightings, 118 of which were cubs. Concerns for the welfare of the young were put to rest when the large family was again spotted a little over a week after the flood. Elephant herds are likewise quickly gaining numbers and sightings are more frequently including those of herds from 100 to 300 elephants. The total number of individuals seen this month was an estimated 1320 elephants. These wildlife numbers are now supported by the massive increase in fresh shoots and ground cover in the reserve.

Today the marsh known as Nel’s Vlei is rampant with wildlife. Pans of water dot the green and yellow landscape, bringing life to a once parched land now filled with eland, kudu, impala, waterbuck, elephant, lion, leopard, and jackal. But perhaps the greatest benefit is received by the wildebeest and zebra, that now have forage for their new young. Hopefully the rains will continue with lesser force into February, to support the full stage summer growth now underway. With the wildlife returned to a system of abundance, stream waters receding, and roads under repair, February is looking to be a beautiful month at Mashatu.