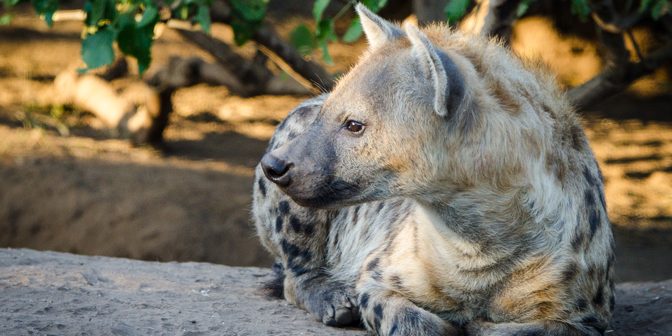 Yesterday morning we had the privilege of witnessing a very rare display of animal behaviour. On arrival to the hyena den which has been providing us with fantastic hyena viewing over the past few months, we discovered that no one was home. A few seconds later a group of 4 hyenas came rushing into the den site, there was a definite sense of heightened emotion in the air as the hyena’s nudged each other and ‘whooped’ at the top of their lungs. The mother of the pack began letting off a very low pitch ‘wooo’, she drew closer and closer to the den until she eventually had her nose in the hole of the den where her ‘wooo’s’ began vibrating the ground beneath us.

We later discovered that the mother had been calling her cubs out of the den as she relocating the pack to a new den site. There are a few reasons why hyena’s would do this: 1) Predator pressure, usually from lions, or 2) for hygiene purposes. In this instance the latter was the cause to the relocation, a den site can become overridden by parasites which can be fatal to the pups being at such a young age.

After the pups eventually arose from the den to the commotion on ground level, mom quickly grabbed one of the pups by the scuff of its neck and darted off into the bushveld. We followed mom, pup and her backup team across the open areas for about a kilometre before she met with the rest of the pack who had clearly settled into their new abode. Mom with one cub down and three to go still had a long day ahead of her…

Another female on the look out for danger

One pup eventually appears from the den

And they are off, mom, pup and a backup

Just before they successfully made it to their new den site

Text and Photographs By: Ruth Nussbaum