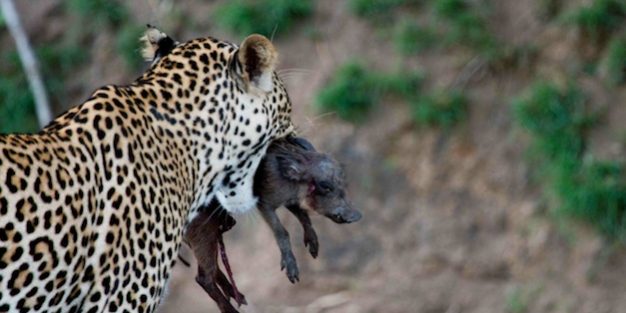 Average temperatures during December ranged between 23°C and 35°C, with a recorded maximum of 40°C. The days following a really hot spell were usually fairly mild in comparison, as the late afternoon and early evening thunderstorms that invariably arrived after a hot day cooled everything down again. The bush is now in the full swing of summer, and the now fully blossomed flora is attracting a multitude of insects, which in turn heralds the arrival of some amazing birdlife. The reminiscent calls of the Woodland Kingfisher and Crested francolin fill the early morning air.

A total of 30 kills were found during the month. Of the 20 impala kills made, the leopards took care of a massive 12, four went to the cheetahs, three to the lions, and the last one to the hyenas. We also came across three kudu kills (2 x lions and 1 x leopard), and two warthog kills (1x lion and 1 x leopard). The three wildebeest kills and one zebra kill were all made by lions.

Cat sightings were down somewhat, although this is to be expected, as they tend to use the dense summer foliage for cover during the day. That said we still enjoyed some spectacular viewing during the month.  This season is not just a festive one for us humans. It’s a time of plenty for the bush’s many carnivores too, due to the sheer abundance of baby ungulates. Conservation biologists refer to this as ‘predator swamping’. It occurs when a prey species such as impala gives birth in synchrony, essentially flooding the landscape with babies. The inevitable predation on these vulnerable newborns tends to have less of an impact than it does on random births spread out over a longer period. You could call it safety in numbers.

On almost every game drive we saw kills made by predators such as pythons, jackal, Martial eagles, lions, leopards, hyenas, cheetah etc. The last thing you want to be in life is a baby impala, because you feature on just about everyone’s menu! Needless to say the large predators are all in tiptop condition as a result of the smorgasbord that’s currently available to them, and the cubs are all consistently well fed too. Some guests even had the rare opportunity of witnessing young leopard and cheetah cubs ‘playing’ with a still live impala. It’s the perfect time of year for these young predators to hone their hunting skills!

With all the rain we’ve had, the change in the landscape has been nothing short of dramatic, so the herbivores are all in very good condition too. From warthogs to wildebeest, zebra and giraffe, they all look as if they’ve just stepped off a photo shoot. With the water evenly distributed across the landscape, the elephants are equally widespread, and can be seen everywhere. This makes cycling and walking in the bush very ‘interesting’ these days! Just ask the guides.

On a more somber note, Stella, a well-known elephant cow, has died on the bank of the Majale River. This incident occurred not even 50m from where we discovered the carcass of another old cow that died recently. Old Stella will be sorely missed.