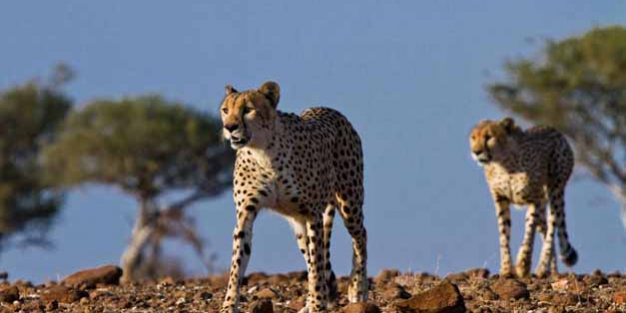 Note: Andrei has been extra busy this week, so unfortunately the blog has to go up sans photos. He did say he’d more than likely get a chance to head out this afternoon and snap a few pics. We’ll upload them to this post as soon as we receive them!

Temperatures have reached the high 30’s and even low 40’s this past week. Hopefully the rain will follow this surge of heat and cool everything down again. The arid landscape has seen no rain for a few weeks now. There have been some light thundershowers outside of the reserve, but Mashatu itself is still very dry given the time of year.

Yesterday guests were privy to a rare and wonderful sight when they witnessed a female cheetah catch a juvenile impala. But instead of killing it herself, she gave the young buck to her five cubs to kill themselves. Learning these hunting and killing skills will stand the youngsters in good stead in the months and years ahead. What an amazing thing to see.

Various leopard sightings were had this week, including a young male trying his luck with a porcupine. The prickly fellow made it quite clear that any attempt to catch him would result in pain and injury for this young leopard. Before long, sanity prevailed and the leopard walked off. We still see the female with the three cubs fairly frequently, and this month marks the youngsters’ first birthday. They are becoming more independent by the day, and tend to spend their time alone, wandering around their natal area and taking in the sights and wonders of the bush. Up to seven different leopards are regularly seen on drives.

The Central lion pride is back on Mashatu for the first time in over a year. They moved right up to Main Camp in the Majale River. This pride rarely moves that far upstream of their territory, but we believe the presence of a young male wandering around in the central region is the reason for this. For safety reasons these adult females will move their cubs out of harm’s way when there are potentially dangerous male lions in the vicinity.

General game is plentiful and giraffe and zebra are seen frequently. Wildebeest, warthog and bushbuck are often found near water pockets in the rivers.