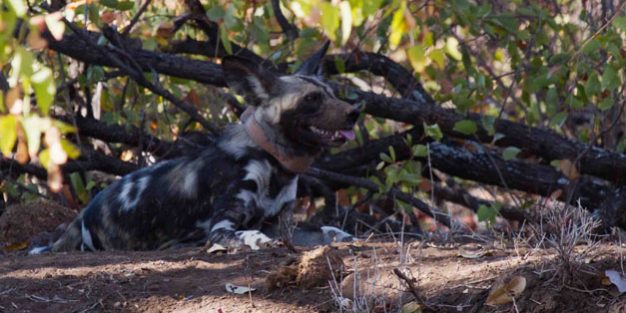 Sub adult playing with an impala leg by Andrei Snyman

The resident pack of five wild dogs is soon going to increase its numbers. The alpha female is monitored daily via her satellite GPS collar, and for the past few days the pack hasn’t moved at all. Their location seems to have remained stationary. What made the situation difficult to monitor, is the fact that the female’s radio collar hasn’t transmitted any data for a few days. But a good visual on the pack yesterday cleared up all the questions regarding what has been going on.

From a previous sighting of the alpha female, we could see that she was pregnant. Yesterday afternoon I finally tracked the pack down to a very dense area, thick with Mopane trees. I found the pack lying in a small riverbed, but the alpha female was nowhere to be seen. I then spotted her lying on the opposite bank. Her face was full of dirt, which suggests that she had been digging out her den site. This will also explain the loss in satellite GPS location due to her perhaps being underground. From watching her, I could tell she was in some discomfort, as if she was in labour. She would lie this way, then that way. Then stand up, then sit down. Never being still for more than a minute. She is heavily pregnant and I believe she is going to den very soon indeed.

Hopefully she will give birth to a large litter and raise them to independence as she did with her previous litter. Time will tell. Very interesting times lie ahead.

I will keep you posted,