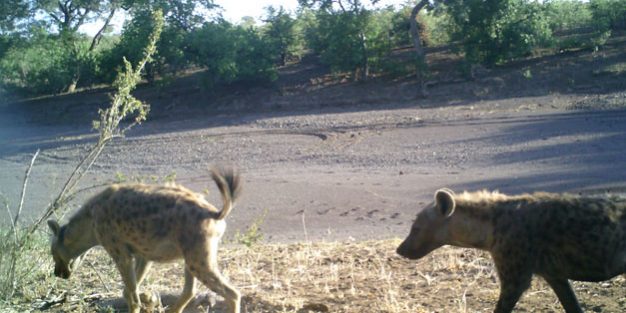 Soft rain finally came to Mashatu! Yesterday some parts in the north and east of Main Camp received approximately 10mm plus. Small drainage lines and streams quickly filled and fed into the Majale River. Today also looks like we might have some more rain – let’s hope we do. Some rain is better than no rain…

Good lion sightings were seen during the past week, combined with some excellent leopard sightings. A young male leopard was seen feeding on a ground hornbill – not exactly the type of prey you’d want to see a leopard feeding on, since ground hornbills are quite rare due to their life history. Only one chick is raised by the parents, and this over a couple of years. It takes years before the breeding pair will nest again.

A leopard captured by the camera in the “camera trap”

Camera traps, part of a predator research programme, have revealed some amazing footage. These units are set along game trails and are triggered by motion. Leopards are the target species, due to their secretive habits, and by placing these camera units, which are as big as the palm of your hand, one gets a sneak preview of what cats roam where. The location for the abovementioned camera trap was at WhiteCliffs, along the Majale River. The cliffs are essentially behind the camera, which is facing 90° on the trail towards the riverbed. Bush pigs, two different leopards, hyenas and various other game were seen during just over a week of trapping.

Hyenas wander past the camera trap