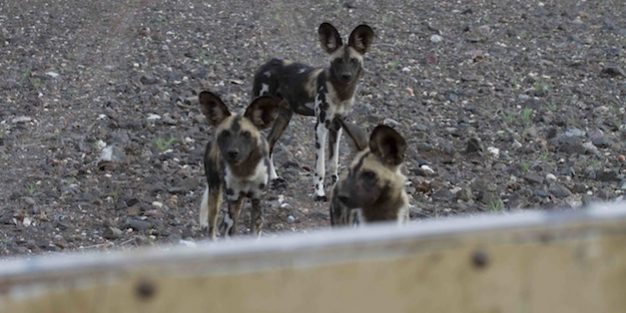 The pack of Wild dogs is finally back in Mashatu! We found the three adults and their seven pups in the Matebole River, just north of Main Camp. Out of all the predators, and perhaps even the majority of the bush’s many residents, African Wild dogs are definitely one of the most interesting and rewarding species to follow.

We were watching the pack rest in the shade of a large Leadwood tree in the river, and after a while curiosity got the better of the inquisitive youngsters and they proceeded to surround the vehicle, sniffing it and staring at us with interest. It was amazing to see just how relaxed they were in our presence.

But while it was certainly a lot of fun to get such an up close and personal look at the pack’s younger members, the most impressive part of watching Wild dogs has to be seeing them hunting.

These carnivores are super fit and have the highest hunting success rate of all the large predators. Essentially, if you can drive fast enough to keep up with these über speedy creatures, you’re bound to see them kill something eventually.

And the afternoon we were with them was no different. After some ‘interesting’ driving, we found ourselves right in the middle of their hunting grounds. There were impala running everywhere! Pronking, jumping, and basically trying just about anything to deter the dogs from following them.

Tucking in by Andrei Snyman

It took about 15 minutes of some pretty fast driving as we tried our level best to keep up (stretching our advanced driver skills to the max in the process), when the pack got hold of an impala ewe in the Matebole River. Within minutes there was nothing but skin and bones left of the unfortunate buck. Although these scenarios play out fairly often, they generally take place so quickly that we’re only privy to them when the terrain permits (which isn’t very often)!

But on the odd occasion that it does we invariably get to witness some really mind-blowing scenes playing out in front of us.

Hopefully the pack will decide to stick around for a while, because it certainly adds an element of excitement to our game viewing. We fitted its alpha female with a satellite radio collar as part of an ongoing predator research project at Mashatu, and through this device we are able to monitor the pack’s movements on a daily basis via the internet. It’s actually very similar to a car-tracking system.