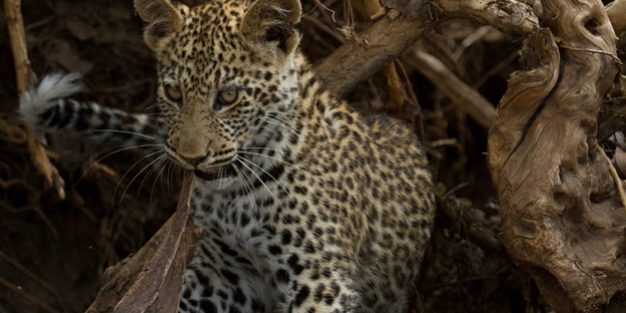 Matswane, the old lion with one eye, has come back to Mashatu after almost a year of residing in the Tuli Circle in Zimbabwe. He was successfully tracked down on a predator drive just west of Mashatu Main Camp. His sudden appearance is intriguing, as his former territory, around the central area was taken over by two younger males around March 2012. His presence is a cause of concern as there are currently nine lion cubs sired by the other two males in the area. Male lions are known to kill cubs of other males. This behaviour is known as infanticide, and is an important part of the male lion reproductive strategy. A lioness that has recently lost her cubs will re-enter oestrus and mate within a few days or weeks, effectively allowing new males to propagate their genes. The two brothers were believed to be in South Africa for the last few days, but one of the brothers has returned and was tracked just south of Matswane’s location. It is uncertain what will happen next, but these two boys are sure to put up a good fight for their territory and females were they to find an intruder!

After about a week of no sighting of cheetahs, the three brothers have returned and made a kill on their favourite sight in the open plains in the east of the reserve. Mapula, the mother cheetah, has also returned to Mashatu after almost a month. Unfortunately she has returned with one less cub. At this stage it is difficult to discern when this cub went missing or what could have happened.

Elephants are plentiful; they are often seen bathing and cooling down in the pools along the Majale river. Some of the pools are deep enough for them to be completely submerged with only their trunks poking out and used as snorkels.

Two leopard cubs are regularly seen on drives. These two cubs are particularly relaxed for their age, and always make for some good entertainment. We are very lucky to have a number of very relaxed leopards on Mashatu, but every now and again we are fortunate to have a glimpse of other shy and elusive individuals.

Pitsane, a large male leopard that is collared, has always been an elusive leopard. He is rarely seen, and if he is spotted, it is often just a swift of his tail or a blur of his pelage that only a trained eye could recognise. Yet guests have been lucky to see him on two different occasions in the last two weeks! The first sighting was on a Predator Drive. As the ‘beep’ of the receiver became louder and louder, we approached slowly, aware that he was probably already watching us from a safe distance. On our approach, I had informed the guests of his elusiveness, and that we had to keep our movements to a minimum and voices low. We didn’t want to spook him, and so we turned the engine off and scanned the area. Soon enough Graphite, our tracker, spotted him. He was lying on a low horizontal branch of an Apple leaf tree not even 40 metres from us! We slowly edged our way towards him, keeping at a respectful distance and moving sideways to his position. He was very relaxed and barely looked up as we moved closer. After some time we moved onto his other side to allow for some better photography, as we slowly edged we were aware that he might take flight any second, but he just watched us lazily and after a little while he yawned, stretched and got up. We slowly followed him as he went about his business; sniffing here and there, marking and clawing a tree. He didn’t mind us in the least and we were lucky to be with him for about an hour and a half. Slowly with time as he becomes habituated to vehicles we may experience a few more of these breathtakingly sightings as he allows us into his world.