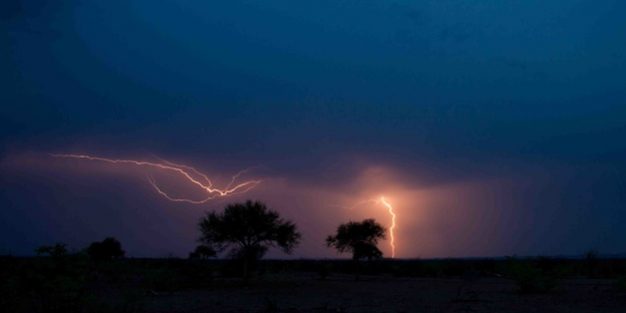 We had a wonderful 37mm of rain during the past week, with some spectacular thunderstorms lighting up the skies in the area. The midday temperatures have been cool, which has made being out in the bush a real pleasure.

Cheetah on drive by Andrei Snyman

Cheetah sightings are still excellent, even more so now that we are seeing the mother and her five cubs on a fairly regular basis. Although the coalition of three brothers that we normally see are believed to be roaming outside of Mashatu’s borders, we have spotted another female and her one sub-adult cub in and around Scraper area.

The well-known leopard family provided some fantastic photo opportunities for guests earlier this week when the female made yet another another impala kill. Her three cubs – two males and a female – are growing quickly. Even at such a young age it’s easy to tell them apart, as the males are already much bigger than their sister.

Young male lions from the south-west by Andrei Snyman

There have been some interesting dynamics within the lion population lately. Now that Matswane, our resident adult male lion, has temporarily moved outside the border, we’ve noticed the lionesses and their cubs moving into areas they haven’t frequented in ages. The reason for this soon became apparent, when we came across two of the three males from the south-west area of the reserve wandering around in the central parts. It’s amazing how these males – who are still out-gunned by our dominant male – sensed his absence in the central region and made their way in. I believe they are searching for the central lionesses, but because of the cubs, the females are more than likely avoiding them. Hopefully Matswane will return from his sojourn soon, because just knowing he is back in the area will be enough to send these cheeky youngersters back to where they came from. You’ve got to love a male lion…