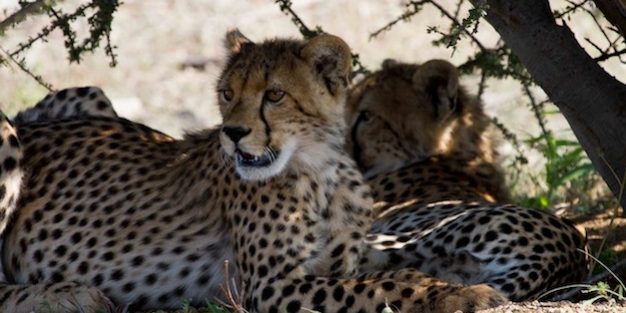 The last couple of days at Mashatu have been rainy,  but very pleasant to say the least. The gentle drizzle that has been falling on the landscape has transformed it from dry and dusty to lush and aroma-filled.

Most of the antelope have given birth by now, so there are plenty of impala, wildebeest and eland calves bounding about all over the reserve. The kudu females are still in the final phases of their pregnancies however, as this species only gives birth later in the season. With all these youngsters around, and some still on the way, the predators are making the most of the abundance of food.

We found a new Spotted hyena den upstream of the Majale/Jwala confluence recently. At this point it is still unclear as to how many pups there are.

The Central lion pride has been spending most of its time outside of Mashatu’s borders, although we frequently see the pride’s younger lionesses (the ones without dependant cubs) mating with the new coalition of male lions.

Whenever old Matswane, the male that is blind in one eye, moves outside of his normal range these younger, but very competitive, males quickly swoop in for some ilicit lovin’ with the single ladies. A pride takeover seems inevitable at this point, as this new male coalition is spending more and more time inside the Central pride’s territory.

On the pachyderm front, we saw a herd of  more than 100 elephants yesterday morning. In closing, the Majale River is still flowing strongly. This has resulted in most of the crossings remaining closed, which in turn has made tracking cats on the opposite bank quite tricky.