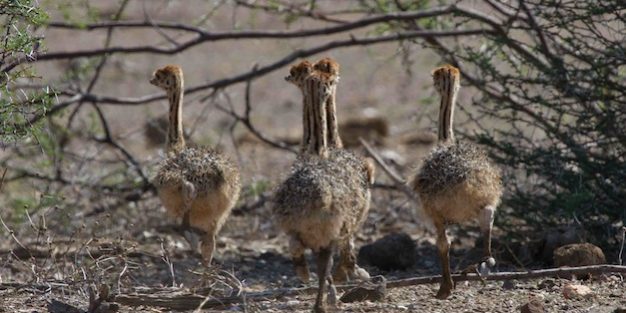 The temperatures have soared again during the past week, with averages recorded at around 35ºC. Hot and windy days are common, and although spectacular thunderstorms were seen moving across the landscape, they didn’t result in all that much rain. Despite the hot weather and sunny days, game viewing is still spectacular. The entire landscape is now completely covered in new leaves.

Spotting leopards might be considered a challenge to most, but even these super elusive cats can’t hide from the well-trained eyes of Mashatu’s rangers and trackers. Leopard sightings have been plentiful, with an average of four leopards being seen on any given day.

Lion sightings have been just as good, with the exception of our adult male, who has been lured onto a neighbouring property by the promise of some female companionship. This morning we spotted the Central Region’s seven strong pride with a freshly killed kudu. Cheetah sightings are particularly special at the moment, with the mother and her five cubs being seen frequently. The cubs are slowly becoming more accustomed to the presence of vehicles, which is great from a game viewing perspective. The elephant herds have been moving further away from the rivers, and are filling the landscape as far as the eye can see.

I placed a small motion triggered camera trap at an elephant carcass to record what type of carnivores are attracted by the food source. It was really interesting to see the various critters that ventured out at night to scavenge on the carcass. It was in the core of the lion’s territory, so the big cats quickly made their way to the free food source. But it was all the other scavengers that arrived to tuck in that really amazed me.