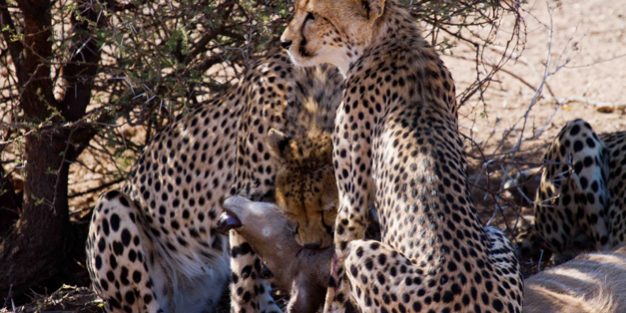 There was spectacular game viewing this week at Mashatu. By far the most amazing sighting ever was the morning when guests were watching a family of six cheetahs hunt and kill a steenbok. Now this was not your usual kill – if there is such a thing as a ‘common’ kill, as every kill by predators that we witness is special. The mother of the five cheetah cubs had her eye on a steenbok and with the help of her yearling cubs, they finally manage to get it…or so they thought. The cunning steenbok managed to escape the claws of the cheetahs and ran for the safely of the vehicle! It darted straight under the vehicle, and soon after six cheetahs were circling the seemingly safe prey. One cheetah cub then went underneath the car and grabbed the steenbok. Some play-hunting tactics followed and after nearly 15 minutes, the steenbok was finished. What followed was amusing, but also a bit weird. In all the excitement of the hunt and build-up to the kill, one cheetah cub (a yearling) then mounted the half-dead steenbok! The laughter from guests in the vehicle was not surprising, and for a couple of minutes the cheetah continued to stay mounted in a very sexual manner. This type of behaviour has regularly been seen, especially amongst cheetah coalitions, as a sign of bonding and even perhaps domination. No intercourse occurs during these interactions, but a heightened sense of sexual arousal has been observed. What makes this very interesting and unusual was the fact that this was a case of predator-and-prey interaction. Talk about adding insult to injury for the poor steenbok! Eventually the steenbok was killed and eaten.

The same family of six cheetahs was seen two days later hunting and killing a juvenile kudu. Luckily for the kudu there was no “dominating” cheetah mounting it from behind! Video footage will follow soon.

Also this week, adults from the Central Pride brought down a wildebeest cow and then also killed the wandering calf. Meanwhile, at the spotted hyenas den along the Majale, east of WhiteCliffs, hyenas were seen with an impala carcass almost every day.

Spot the leopard by Andrei Snyman

The picture (above) taken at the Vlei this week has a hidden secret. An adult leopard is looking back at me while I’m taking the picture. Can you see it?