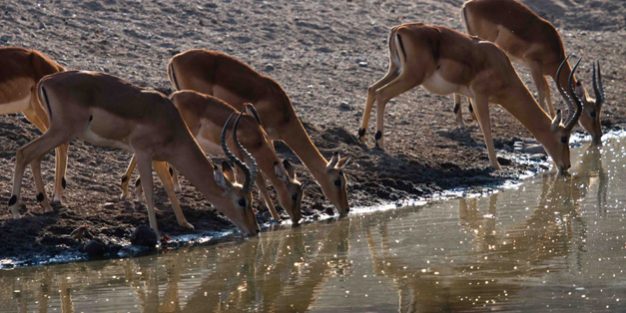 With numerous cold fronts moving through South Africa, we at Mashatu also feel the the effects. Windy conditions, like today, cause most of the animals to move into thickets where they are sheltered from the worst of it. However, these thickets hold secrets in them, as most predators also rest in them as they wait for nightfall.

Certain pockets of water along the Majale River act as a massive magnet for all animals and bird species in search of both water and fish respectively. It is also around these last remaining waterholes that predators are focusing their hunting activity. Saddle-billed storks also regularly fish these waters for Tilapia fish. Around one of these waterholes the remains of at least five different impala kills can be seen. The majority of these kills have been made by a young male leopard. This same young male was himself targeted by a larger predator this past week. Guests were watching him resting in the riverbed, when a lioness came around the corner. In a heartbeat, the male shot up a tree – just in time to escape the danger that certainly would have sealed his fate.

Lioness and cub by Andrei Snyman

The lioness with the four new cubs was also seen this week. The mother was moving her cubs to a new den site, when we saw the family. As these cubs are still too young to join the rest of the pride, they are hidden in a safe den until they are stronger and bigger.