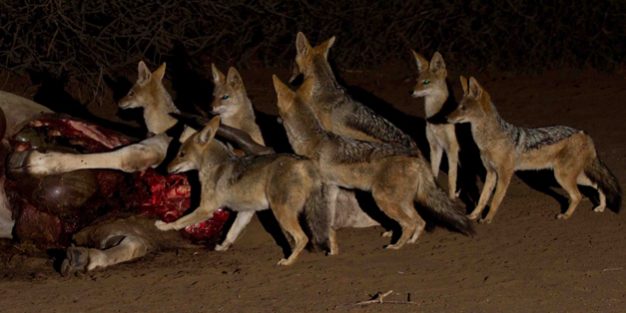 The past week at Mashatu has been filled with loads of general game and predator sightings. Aged kudu and eland bulls are particularly hard hit by the dry conditions. Their worn-down teeth make grinding fibrous vegetative content difficult, and they seldom obtain the necessary protein and nutrients from the remaining browse available, to have the strength to avoid apex predators such as lions and spotted hyenas.

An adult eland bull manage to just escape the claws of a lone lioness, but the following day this same bull was was caught and killed by another pride. Same area, different pride of lions. During the next couple of days the lions were engorging themselves on the spoils of the hunt, but once they turned their backs on the carcass to rest, 11 black-backed jackals descended on it like vultures during the daytime. With 11 little mouths quickly nipping off bits and pieces of the large carcass, even the lazy lions realised that they need to do something if they were to have anything left…

Black back jackal feeding on a lion kill by Andrei Snyman

Lion with the eland carcass by Andrei Snyman

The famous coalition of three cheetah brothers was found with a freshly killed kudu bull. This wasn’t an old bull however, but rather a two-year old bull. Not even a kilometre from this sighting we found the family of six cheetahs resting in the shade of a Sheppard’s Tree.