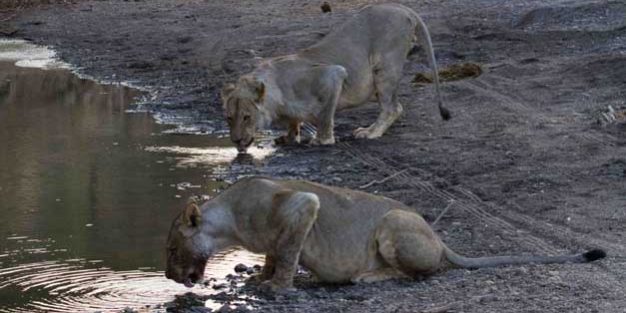 With the clouds looming and retreating over the last few days, the promise of rain remained just that. The bush is changing in spite of the weather’s refusal to cooperate however, and green pastures can be seen far and wide. Although this is mainly thanks to the rain we enjoyed last week, which measured more than 20mm in some places! The Tuli dust has finally settled, and the air is clean and crisp. It’s a wonderful time to be in the bush.

Lions are making the most of the ‘end of the dry season’ conditions, and are killing a near surplus of animals as a result. The famous four sub-adults were spotted on an eland kill, and not three days later they killed another eland a mere 20m from where they’d nabbed the first one. As if that wasn’t enough, two days after that the greedy quartet then bagged themselves a warthog. Amazingly, all three kills took place within 30m of each other. Needless to say, there was more than enough meat to go around. Even scavengers like the vultures and Black-back jackals didn’t have to fight over the scraps the way they normally do.

Leopard sightings are still excellent, with impala ending up in trees (usually in close proximity to the remaining waterholes) on a regular basis thanks to these astute hunters. By hanging around the shady areas next to the water, the predators find themselves in the perfect position to prey on thirsty animals. Their tastes are not limited to just buck though, as we realised recently when we saw a leopard kill a Goliath heron. The big bird didn’t go down without a fight though, emitting a veritable cacophony of screeches before it finally died. Within minutes a couple of Spotted hyenas arrived on the scene, lured by the possibility of an easy meal. They’d probably been resting nearby when the hapless heron’s cries for help alerted them to the fact that something was up. The opportunists were out of luck however, as the shrewd leopard had already taken its spoils up a nearby tree.

Elephants are not that widespread at the moment, and occur mostly along the Limpopo River and surrounds. Last night we had a small herd drinking at the Main Camp waterhole while guests were enjoying dinner. The blessings of Africa.