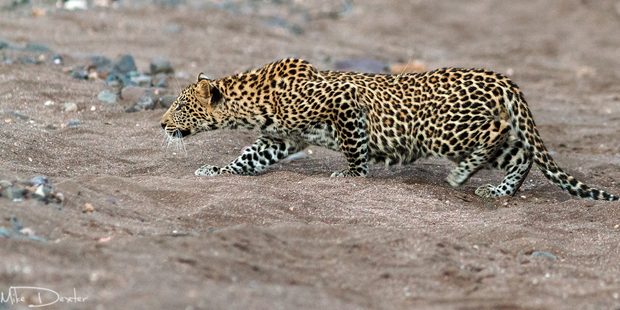 With the onset of autumn, the landscape of Mashatu is reflecting the warm colours associated with this time of year. The last few butterflies still remain, and some of the migratory birds can still be found, but the harsh sun has definitely been replaced by a cool breeze.

On the last predator drive the old male lion, Matswane, was successfully tracked down. To our delight he was not alone, but accompanied by two lionesses – one of which had two cubs! The mother of the cubs was quite wary of our presence and gave us quite an impressive display, warning us to keep our distance in an effort to protect her cubs. These lionesses are unlikely to have seen many vehicles, so we gave them plenty of space allowing them to settle within our presence. Although the cubs were not used to our vehicle, their curiosity was evident, and they raised their little heads in an effort to peer at us through the thick foliage.  The family was resting near a freshly killed eland carcase. After a good, long sighting we left them to their dinner.

The following morning, in anticipation of seeing the lions again, the game drives headed to their location, but they had already moved on. While searching for their tracks, our guides came across fresh tracks of three male lions, which may have been the reason why Matswane and his family moved on so quickly from their kill.

The three male cheetahs were recently seen on top of a ‘koppie’ (a small hill rising up from the African veld), keeping a look out for possible prey, but more importantly, scent-marking their usual tree. Cheetahs have particular scent-marking posts, mostly trees that they will mark. The males tend to mark by means of urine spray, but can also mark the tree with scats if they are able to climb up onto it. Females are less predisposed to scent-marking but, if in the area, will often investigate the tree to note of any previous visitors.

Leopard sightings have been very good! A large male leopard has been spotted a couple of times near Tent Camp. He was seen again today proudly posing in the golden early morning light. The two young leopard cubs have become a favourite among our guests. These two youngsters are growing up very quickly, and are often seen chasing squirrels and francolins; learning to master their hunting skills. On a particular sighting, one of the cubs became a little more ambitious and decided to hunt a Saddle-billed stork. The young leopard, having spotted his prey from across the river bank, approached the bird at a fast crawl. As he neared his prey he suddenly realised that it appeared a lot bigger – and reassessed his hunt as he lay there a mere five metres from the oblivious stork. The three banded plovers soon caught his attention, and with his renewed interest he gave chase to these swift little birds. This game lasted until a large impala ram caught his attention walking in the distance, and forgetting all about his last incident, he took off after this even bigger prey!

Elephants have been plentiful. They can be found widely spread across the reserve and into the drier parts of the reserve that received plenty of rain.

A large eland herd of about 200-300 animals has been spotted a number of times, these giant antelopes make for a spectacular sighting when they are seen all together in open plains.